Days of Our Lives Spoilers: Nicole Attacks Chloe – Blames Her For Holly’s Kidnapping

BY hellodrdavis on April 22, 2019 | Comments: one comment
Related : Days of Our Lives, Soap Opera, Spoiler, Television 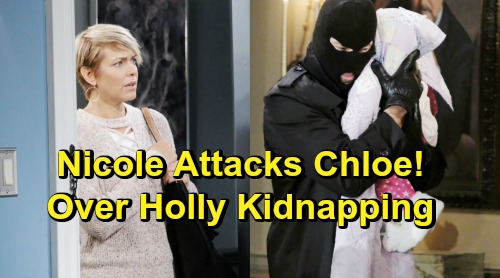 Days of Our Lives (DOOL) spoilers tease that Chloe Lane (Nadia Bjorlin) will be feeling frantic. She will learn that Holly Jonas (Harlow and Scarlett Mallory) is missing from the DiMera mansion. Of course, Chloe and the kids were saying with Stefan DiMera (Brandon Barash) in order to keep them safe – the DiMera mansion was supposed to be like a fortress.

But DOOL viewers will see a masked man sneak in and carry little Holly out of the mansion covered in a blanket. As it will turn out, Ted Laurent (Gilles Marini) will be feeding information to someone who ultimately kidnaps Holly. With Ted on the inside, no amount of protection could save Holly from being kidnapped.

But of course, no one will know about Ted’s involvement in the whole thing just yet, so it will seem strange to everyone that a stranger could just waltz right into the secure DiMera mansion and take Holly. It won’t make sense to anyone, and it especially won’t make sense to Nicole Walker (Arianne Zucker), who will be freshly back on the Salem scene.

Right about the time that Holly is taken, Nicole will appear back in Salem. The details surrounding Nicole’s return remain to be seen, but it looks like she’ll be having a touching reunion with Eric Brady (Greg Vaughan) when news breaks of Holly’s kidnapping. According to DOOL spoilers, Sarah Horton (Linsey Godfrey) will bust up “Ericole’s” reunion to let the newly reunited couple know that Holly is missing.

And that’s going to completely rattle Nicole, who has been separated from her daughter for months and was hoping for a nice reunion with her. Instead, she’ll hear that Chloe has been taking care of Holly, which may upset Nicole. DOOL viewers will remember that when Nicole was trapped in the DiMera warehouse, she begged Eric to take care of Holly.

So, Nicole will probably be shocked to find out that Holly was in Chloe’s care, and even more shocked to learn that Chloe and the kids were living in the DiMera mansion with Stefan. Emotions will overcome Nicole, and she’ll wind up having a blowup with Chloe during which she’ll blame Chloe for putting Holly in harm’s way.

Nicole probably won’t be happy to hear that there were prior security breaches at the DiMera mansion, but Chloe chose to stay there and let Stefan continue to oversee her safety when the whole situation clearly wasn’t working well. Of course, Chloe had the option of moving into the Kiriakis mansion with Brady Black (Eric Martsolf) but refused, she she’ll probably feel guilty about the whole thing.

Of course, who exactly kidnapped Holly remains to be seen. It’s certainly looking like the cartel was behind it, and that Ted was working with the cartel, but time will tell whether that’s the case. Do you think it will be long until Nicole gets her reunion with her little girl? Stay tuned to DOOL and don’t forget to check CDL often for the latest Days of Our Lives spoilers, updates, and news.