Days of Our Lives Spoilers: Is Brandon Barash Back Filming at DOOL – Hope for Stefan Ahead of Heartbreaking Exit? 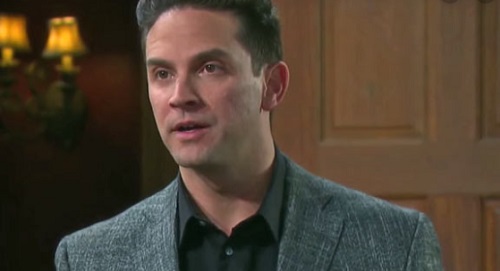 Days of Our Lives (DOOL) spoilers tease that Brandon Barash’s heartbreaking exit as Stefan DiMera is coming up. Stefan and “Stabi” fans are naturally dreading this. It’s such a shame to lose Barash as a performer as well as his character’s sizzling pairing. However, there could be good news brewing behind the scenes. Is Barash already back filming before his exit even airs? It’s a possibility based on some new clues.

For starters, we’ve got a recent Instagram story from the studio. Someone posted a video that featured someone who resembles Barash. It’s too far away to know for sure, but his build and hairline seem like they could be a match. We also know Barash recently shaved off his beard, which would be something he’d have to do for this role. Days viewers want that sweet baby face!

None of this is guaranteed evidence, but Camila Banus (Gabi Hernandez) did something that offers a great deal of hope. On Twitter, one Stefan fan was sold on the leaked footage and tweeted another user about Barash being on set again. She said, “Well he’s already back filming” before adding an emoji with polished nails and a smirking smiley face. Banus liked the tweet, which could be a huge hint.

Of course, Banus has still been liking tweets expressing disappointment over Stefan’s looming exit. She’s also been liking tweets from fans rooting for him to get back on the show. Even so, this seems like a little different situation. This person specifically said Barash was already back and Banus gave that tweet her support. Why do that unless it’s actually true?

There wouldn’t be much point to supporting false information. If Barash isn’t on set again, Banus could’ve replied to clarify and urge everyone to keep fighting. Since she clearly wants Stefan and Gabi together again, it wouldn’t benefit her to support the tweet and have everyone assume the job’s done.

Nothing has been confirmed by Days of Our Lives, but this is certainly exciting to think about. DOOL made a massive mistake in getting rid of Barash, and they know that now. It’s just taken them some time to rectify things since they film several months in advance.

If Barash has indeed rejoined the cast, will he be playing Stefan or a new character? Days of Our Lives spoilers suggest Stefan’s heart will be given to Julie Williams (Susan Seaforth Hayes), but that means nothing. In a world with Dr. Wilhelm Rolf’s (William Utay) magic and miracles, any deadly exit can be undone. They could even rewrite it that some lookalike’s heart was donated instead.

Whatever the case, perhaps viewers can be cautiously optimistic about Brandon Barash’s comeback. Do you hope Barash is headed back to Salem? Do you want Stefan to return or would you be OK with a new character? We’ll give you updates as other Days details emerge. Stay tuned to DOOL and don’t forget to check CDL often for the latest Days of Our Lives spoilers, updates and news.