Days of Our Lives Spoilers: Jack and Kayla Unleash Fury on ‘Stefano’ – Having Steve’s Face Brings Bashing and Backlash 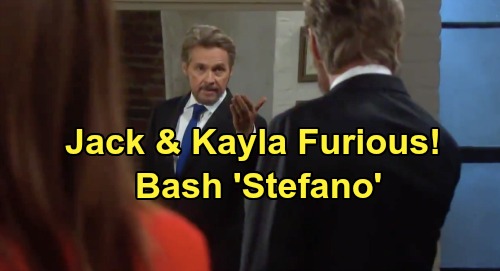 Days of Our Lives (DOOL) spoilers tease that “Stefano DiMera” aka Steve Johnson (Stephen Nichols) will have to deal with some drama. There are certainly some advantages to Stefano’s memories being implanted in Steve. “Stefano’s” got the body of a young, healthy man and can carry out his plot while concealing his true identity.

Of course, there are some drawbacks to having Steve’s face as well. For starters, “Stefano” has had to stay in hiding for a while – and “Princess Gina Von Amberg” aka Hope Brady (Kristian Alfonso) has probably been getting on his last nerve! “Stefano” has been in touch with Chad DiMera (Billy Flynn) through their online communications, but he can’t grant his son the face-to-face meeting he wants.

Having Steve’s face also means facing backlash for Steve’s mistakes – which seemingly weren’t Steve’s mistakes at all. Steve obviously wouldn’t have signed up for trading his memories and letting Stefano take over his body. Days of Our Lives spoilers say he was surely kidnapped and forced into this like Hope was.

It’s not Steve’s fault he only sent a card after Adrienne Kiriakis (Judi Evans) died. He would’ve come to Adrienne’s funeral if he were actually Steve right now. It also seems to Kayla that Steve abandoned her again and just signed the divorce papers like they were nothing. In reality, that’s all “Stefano’s” doing. He’s the one who’s enraged Steve’s loved ones, so he’ll have to pay the price for that.

DOOL fans know Jack Deveraux (Matthew Ashford) was positively seething during his recent conversation with Kayla Brady (Mary Beth Evans). He’s furious over how Steve’s treated Kayla as well as that whole skipped funeral debacle. Jack feels like it was outrageous for Steve to bail on their sister’s memorial service. You can bet Jack will give “Stefano” an earful about that when he finally sees him.

Days spoilers say “Stefano” will face Kayla’s questions and fury as well. Even Justin Kiriakis (Wally Kurth) will probably want to get in on the Steve bashing. None of them will know this isn’t the real Steve standing in front of them – not yet anyway. Naturally, it won’t take long for clues to emerge. “Stefano’s” personality is quite different from Steve’s, so there are bound to be suspicions sooner or later.

That’s especially true if “Princess Gina” gets busted! Once everyone knows Princess Gina’s memories were given to Hope, it could raise red flags about why Steve’s behavior is so unusual. Perhaps Jack and Kayla will team up to figure out the truth.