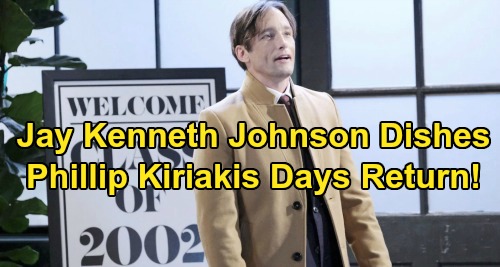 Days of Our Lives (DOOL) spoilers tease that the drama surrounding the return of Phillip Kiriakis (Jay Kenneth Johnson) on the “Last Blast Reunion” series on the DOOL App is about to heat up. If you’ve been following the new series, then you know that Chapter 1, Episode 1 of the “Last Blast Reunion” ended with Phillip surprising Belle Black (Martha Madison) and Chloe Lane (Nadia Bjorlin) in New York City by showing up at .com, the cafe opened by their old high school buddy Kevin Lambert (Chadwick Hopson).

The last time that Days of Our Lives viewers saw Jay Kenneth Johnson as Phillip was back in 2011, but the last time the character was in Salem, he was portrayed by actor John-Paul Lavoisier from 2015-2016. Well, now that Jay Kenneth Johnson has reclaimed the role for the “Last Blast Reunion,” fans are reconnecting with the actor and are wondering whether Jay might ever return to the role on the main DOOL series on NBC.

Recently, Jay sat down with his costars and on-screen parents Lauren Koslow (Kate DiMera) and John Aniston (Victor Kiriakis) for an interview on the DOOL App. They reminisced about working together in the past and what it was like seeing Jay after so much time had passed. “It had been seven years…They were both here on the first day I came back,” Jay said of his on-screen parents.

Lauren then chimed in: “I was super excited because this is Kate’s baby, plus I love Jay. It was a great surprise.” And about her character’s relationship with Phillip, she said: “It’s obviously a very special relationship. Kate was able to experience his whole childhood, so she’s super possessive and protective of him…this was her golden boy, that’s why she wanted everything for him, which can be a little overwhelming.”

About his time playing Phillip on the main DOOL series, Jay said, “I had a good time. They really took the character to darker places and I got to work with both of these two [gesturing to Lauren and John] on that darker premise.”

And is there a possibility that the character of Phillip could return to Salem and to the Days of Our Lives TV series? “I think that for Kate, she’d be absolutely thrilled to welcome him back,” Lauren said. And John thought that Victor would be pleased as well, saying, “Victor would be thrilled to death to have him back. He’s run out of fodder!”

It certainly seems like there be room for Phillip in Kate and Victor’s lives right about now. Brady Black (Eric Martsolf) is no longer running Titan, and it seems that Phillip would be the perfect person to step in and give Xander Kiriakis (Paul Telfer) a run for his money. We could certainly see some great Phillip/Xander conflicts ensue!

Of course, whether Philip ultimately returns to Salem remains to be seen, but it certainly appears that he and his former co-stars would be up for that happening down the road. Would you like to see Phillip back in Salem after his “Last Blast Reunion” appearance wraps up? Stay tuned to DOOL and don’t forget to check CDL often for the latest Days of Our Lives spoilers, updates, and news.