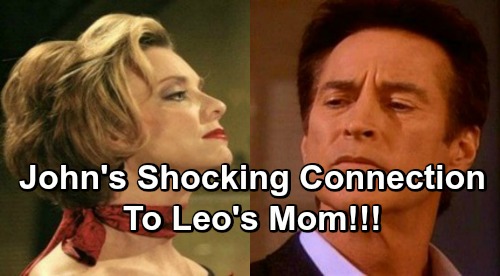 Days of Our Lives (DOOL) spoilers tease that John Black’s (Drake Hogestyn) investigation will bring some surprises. He promised Will Horton (Chandler Massey) that he’d get some answers about Leo Starke’s (Greg Rikaart) mother. Leo won’t say much about her other than she’s pretty much the “worst mom ever.” He has no interest in reconnecting, but Sonny Kiriakis (Freddie Smith) has other ideas.

Thanks to “WilSon’s” plan and John’s help, it won’t be long until Leo’s mom is back in the picture. However, it doesn’t look like Leo will be the main reason she comes around. Days of Our Lives spoilers say John will make a shocking discovery about this woman, who goes by the name of Diana Cooper (Judith Chapman). It turns out Diana is tied to someone else on canvas – and it’s John himself.

DOOL fans can expect John to inadvertently stir up trouble for his marriage. Days spoilers say Diana is a character that viewers already know. With that in mind, it seems likely that Diana Cooper was once Diana Colville (previously played by Genie Francis). Diana had a romance with John back when he believed he was Roman Brady (now played by Josh Taylor). It was a messy time in Days history!

Regardless, Diana was indeed connected romantically to John somehow. She considers him the one who got away, so she’ll be determined to reel him back in. Days of Our Lives spoilers say Diana’s arrival will rock the boat for John and Dr. Marlena Evans (Deidre Hall). They’re finally chugging along as a happy couple, but Diana will really throw them for a loop.

As for Leo, major Mama drama is unavoidable. He won’t be pleased when Diana shows up and brings chaos to his life. Leo’s got a good thing going with his rich husband and cushy mansion setup. He’ll hate the idea of Diana potentially destroying it. That’s apparently what Diana tends to do when she gets involved in her son’s affairs.

Leo aka Matthew Cooper will try to prevent disaster, but Will and Sonny will be rooting for one! They’ll hope Diana is the way to get rid of Leo forever. We’ll give you updates as other Days news comes in. Stay tuned to DOOL and don’t forget to check CDL often for the latest Days of Our Lives spoilers, updates and news.