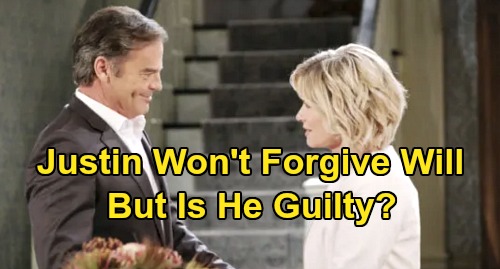 Days of Our Lives (DOOL) spoilers tease that Will Horton (Chandler Massey) will finally have a face-to-face meeting with someone he hurt deeply. DOOL fans know Sonny Kiriakis (Freddie Smith) had been coming to see Will behind bars, but their meetings were tense and painful. Although it was an accident, Will blames himself and was held legally responsible for Adrienne Kiriakis’ (Judi Evans) death.

Sonny’s had to deal with the fact that his husband killed his mother and that’s understandably been hard to process. It’s tough for Sonny to make sense of someone he loves taking away someone else he loved. However, Sonny obviously wasn’t the only person affected by Will’s actions. Justin Kiriakis (Wally Kurth) was devastated by Adrienne’s demise and has had to watch Sonny’s turmoil, too.

It’s been over six months since that fateful night Adrienne died, so Justin’s had time to mourn. He moved on with Kayla Brady (Mary Beth Evans) quite quickly, but that doesn’t diminish the love he had for Adrienne. She was the love of Justin’s life and is now gone forever – or at least until Days decides to undo her death. They certainly could since back-from-the-dead stories are so frequent.

Nevertheless, Adrienne is deceased for now, so Justin will have a chance to confront his beloved wife’s killer. Days of Our Lives spoilers say Justin will meet with Will during the week of December 9-13. Will this be a meeting with Will requests? Will Justin simply show up seeking closure?

Will doesn’t seem to think he’s worthy of anyone’s time and attention. Since he pushed Sonny away, Will may not feel like he should bother Justin either. This could be a decision of Justin’s that catches Will off guard. Regardless, the topic of Will and Sonny’s marriage may come up during this meeting. It seems reasonable, especially since Justin watched Sonny and Evan Frears (Brock Kelly) bond at Thanksgiving.

Justin may be hoping for a divorce soon so Sonny can find happiness like he’s found with Kayla. It seems likely Justin will be cold and harsh with Will during their discussion. Will’s deep remorse may not matter much to Justin at this point. Of course, there’s bound to be a twist in this storyline. Days of Our Lives spoilers say there are more shockers to come due to the time jump.

After Mackenzie “Mickey” Horton was kidnapped, Victor Kiriakis (John Aniston) pushed Xander Kiriakis (Paul Telfer) to make the anonymous text sender spell out exactly what he thought they did. Clyde Weston (James Read) replied that they had an innocent man locked up. That convinced Xander to write out his confession, so it was clearly accurate information.

There’s likely a reason DOOL kept things anonymous and never mentioned Ben Weston (Robert Scott Wilson) specifically. The only other crucial male character who’s locked up right now is Will – well, other than Clyde, but we all know he’s not innocent! As for Will though, we really don’t know that he’s guilty. Without seeing what actually happened on that horrible night, nobody can say for sure.