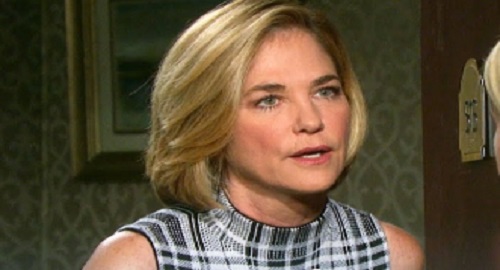 Days of Our Lives (DOOL) spoilers tease that “Princess Gina Von Amberg” aka Hope Brady (Kristian Alfonso) will face plenty of bad news. During the week of December 16-20, things certainly won’t be looking up for “Princess Gina.” She’ll deal with a major setback in her pursuit of John Black (Drake Hogestyn), but that’s the least of her worries since Abigail DiMera’s (Kate Mansi) hot on her trail.

Rafe Hernandez (Galen Gering) will grow increasingly suspicious of Hope as well, so he’ll add to “Princess Gina’s” problems. Days of Our Lives spoilers say Rafe will be floored when he stumbles across “Princess Gina’s” lair. He’ll marvel at the throne and art collection stashed there, so “Princess Gina” will fear exposure is imminent.

On the bright side, “Princess Gina’s” mistakes will add up to good news for Eve Donovan (Kassie DePaiva). Thanks to all the growing suspicions, Eve will finally get off the hook. DOOL spoilers say Eve will walk free after it’s confirmed she didn’t try to kill Jennifer Horton (Melissa Reeves). Even Jenn should be happy for Eve since she never wanted the wrong person locked up for the crime.

That’ll still leave Jennifer to wonder and worry about the true culprit, but she’ll be glad Eve can finally move on with her life. Days of Our Lives spoilers say Eve will have a decision to make once she’s a free woman. There clearly isn’t much left for Eve in Salem anymore. This town honestly comes with too many painful memories, so it wouldn’t be a bad idea to start fresh somewhere else.

It looks like that’s exactly what Eve will decide to do during the week of December 23-27. Days spoilers say Eve will make a significant choice that affects her future. It seems likely Eve will determine that she needs to put Salem behind her and wipe the slate clean.

Perhaps Eve will pick a new career and decide to follow her dreams. She could least settle on some city she’s always wanted to live in. The point is Kassie DePaiva’s exit is rapidly approaching – and this seems like an easy strategy usher her character off canvas. There’s a great big world out there just waiting for Eve!

Some hot drama’s brewing on the NBC soap, so stay tuned. We’ll give you updates as other Days details emerge. Stick with DOOL and don’t forget to check CDL often for the latest Days of Our Lives spoilers, updates and news.