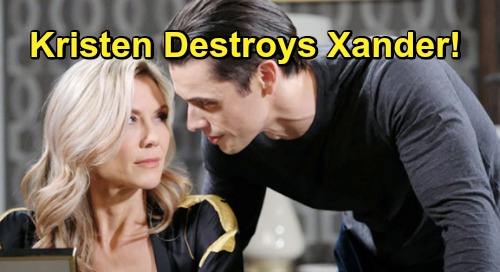 Days of Our Lives (DOOL) spoilers tease that Kristen DiMera (Stacy Haiduk) will realize she’s been betrayed. During the week of July 8-12, Kristen will discover something shocking. There’s a good chance it’ll be the captives in the Dimera tunnels! Even if Kristen doesn’t find Kate Roberts (Lauren Koslow) and Ted Laurent (Gilles Marini) in the flesh, she’ll inevitably find some clue that they’re alive.

That’s a big problem since Kristen trusted Xander Cook (Paul Telfer) to get rid of them. She ordered Xander to kill Ted, but our “Xandy” just couldn’t do it. His love for Sarah Horton (Linsey Godfrey) has softened his once cold heart. Xander isn’t exactly ready to be Ted’s bestie, but he couldn’t pull the trigger and that’s something. He couldn’t kill Kate either, so Xander’s just buying time right now.

It’s not clear how Xander thinks he can get away with this. In the end, it doesn’t matter since we know he won’t. Kristen isn’t a fool, so Xander won’t be able to deceive her for long. Days of Our Lives spoilers say Kristen will fly into a rage over the surviving hostages. She’ll realize that if you want something done, you often have to do it yourself.

Kristen may consider pumping a couple bullets in Ted and Kate, but we’d say a joint escape is more likely. Days probably would’ve killed Ted by now if they were going to. Ted’s indeed exiting the show soon, but he may live to tell his tale and leave the door open for his return. As for Kate, she’ll be sticking around Salem. There’ll definitely be some way for Kate to get out of her jam.

Days of Our Lives spoilers say the real issue here is Xander’s deception. He’s proven that he’s an untrustworthy partner in crime. Kristen may choose to cut Xander loose and make him feel her wrath. She’s excellent at making people miserable, so Xander might want to watch out! If he finally starts winning Sarah over, Kristen may be waiting to sabotage his DOOL romance.

Days spoilers hint that Kristen will certainly want some form of revenge. Will Xander pay the price for ignoring Kristen’s orders? We’ll give you updates as other news comes in. Stay tuned to DOOL and don’t forget to check CDL often for the latest Days of Our Lives spoilers, updates and news.