Days of Our Lives Spoilers: Kristen’s Not Calling The Shots Alone – Who Is Her Secret Partner? 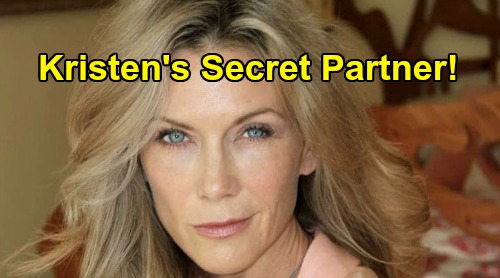 Days of Our Lives spoilers reveal Kristen DiMera (Stacy Haiduk) isn’t the only one in charge of the resurrection scheme. Even though she is the major player, who else is she partnering with? That is a question that was brought up this week on the soap.

With as much as Eve seemed to know about the project, could she be Kristen’s partner in crime?

Xander’s Not in Charge, But a Peon

Days of Our Lives spoilers suggest that Xander was part of the project. As much as he wants to be top dog in every area of his life, Xander has always been a peon. He doesn’t give orders, he obeys them. Sure, he’s a bad guy on DOOL, but isn’t capable or crafty enough to be in charge of something this big. Plus, he cut ties with Kristen and yet, the resurrection project goes on.

Legendary soap icon Joseph Mascolo passed away. However, his character lives on. His location just isn’t known and it will likely remain that way. After all, Stefano DiMera cannot be replaced and a recast would be an insult to Mascolo’s memory. However, that doesn’t mean his name won’t be included in storylines. Could he be in charge of the resurrection project?

A long time ago, EJ DiMera died. We know the character is alive but is in poor condition. Andre (Thaao Penghlis) was shot and could be resurrected. However, we haven’t seen him just yet. Tony died years ago, but was recently discovered to be alive and well. Then there is Sami Brady (Alison Sweeney), who refused to give up on finding EJ.

All of these people could somehow be part of the project. It is true that many of these characters didn’t get along with each other, but never say never when Ron Carlivati is the head writer!

Who do you think is working with Kristen DiMera? Comment below and tell us your best theories! Stay tuned to DOOL and don’t forget to check CDL often for the latest Days of Our Lives spoilers, updates and news.