BY hellodrdavis on September 30, 2019 | Comments: one comment
Related : Days of Our Lives, Soap Opera, Spoiler, Television 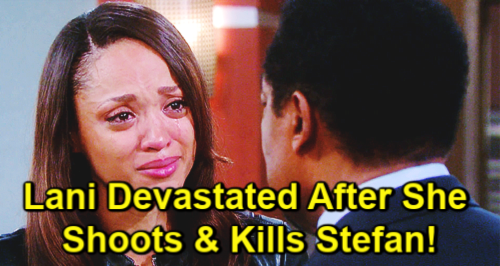 Days of Our Lives (DOOL) spoilers tease that Lani Price (Sal Stowers) will face a terrible reality. As DOOL viewers know, Vivian Alamain (Robin Strasser) has done nothing but cause turmoil since she’s come back from the dead.

She’s interfered with her son Stefan DiMera’s (Brandon Barash) relationship with Gabi DiMera (Camila Banus), and worse, she shot Kate DiMera (Lauren Koslow) and buried her alive in the cemetery. Fortunately, Kate survived the ordeal, but soon Vivian’s actions will cause a terrible tragedy.

It looks like Lani and the rest of the Salem PD will be on the lookout for Vivian after it becomes known that she shot and buried Kate. Vivian will be on the run, and it seems that Lani will corner her in the park and a shootout will ensue. According to DOOL spoilers, Lani will order Vivian to drop her weapon, but Vivian won’t comply, causing Lani to discharge her weapon.

Stefan DiMera Leaps In Front Of The Oncoming Bullet

Unfortunately, instead of shooting Vivian, Lani will wind up shooting Stefan, who will come upon the scene at the last minute and leap in front of the oncoming bullet, saving his mother.

Stefan will be mortally wounded, and according to DOOL spoilers, he’ll eventually die at the hospital. Of course, Gabi and Vivian will be devastated by this crushing blow, and it looks like they’re going to blame Lani for something that was clearly Vivian’s doing.

Well, Lani is apparently going to have a terrible time after the shooting, as one can imagine. She’ll be horrified that Stefan was caught in the crossfire, and even though she’ll probably know from an intellectual standpoint that it wasn’t her fault, she’ll still feel tremendous guilt and remorse over causing someone’s death.

In fact, it appears that Lani will have some serious psychological difficulties in the aftermath of the shooting. She might experience some PTSD symptoms as she relives the terrible event, and she’ll surely have some sleepless nights over the ordeal. According to Days of Our Lives spoilers, her dad Abe Carver (James Reynolds) will do his best to console his daughter, but she’ll be feeling the effects hard.

It appears that even Lani’s relationship with Eli Grant (Lamon Archey) may suffer. DOOL viewers will remember that these two are engaged and have been happily planning their wedding. The problems that Lani will face as a result of her shooting Stefan will apparently have an impact on the wedding plans – it looks like Lani will be so distraught after the shooting that planning a wedding will be the last thing on her mind.

At any rate, look for Lani to experience some serious guilt and aftereffects of her accidental shooting of Stefan. Do you think that Lani will call off the wedding as a result of the shooting? Stay tuned to DOOL and don’t forget to check CDL often for the latest Days of Our Lives spoilers, updates, and news.