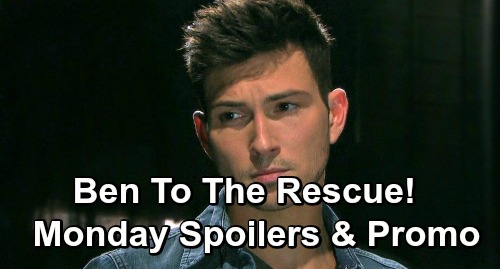 Days of Our Lives (DOOL) spoilers for Monday, June 10, tease that some shocking moments are coming up. We should note that Days will be preempted on Thursday, June 6, as well as Friday, June 7. The action won’t pick back up until Monday rolls around, but it’ll be worth the wait!

First, Claire Brady (Olivia Rose Keegan) will flee the scene of the crime. Whether she runs as far away as possible or stays just close enough to watch, she’ll definitely do her best to avoid getting caught. Claire had regrets the last time she tried to burn someone alive; will she have regrets this time, too?

It’s tough to say since Claire’s feeling so vengeful. Whatever the case, Claire will certainly worry the walls are going to close in again. She’ll apparently count on Eve Deveraux (Kassie DePaiva) to frame Ben Weston (Robert Scott Wilson) for multiple fires now. That could actually work in Eve’s favor since Claire used the same lighter for her latest blaze.

Meanwhile, Ben will race to the Horton cabin and find the fire raging. Once Ben realizes Tripp Dalton (Lucas Adams) and Haley Chen (Thia Megia) are inside, he should leap into action.

Haley and Tripp will end up losing consciousness, so Ben may have to drag them to safety before the whole building collapses – or the fire department arrives. Either way, there’ll be extreme danger.

Other Days of Our Lives spoilers state that Eve will tackle a different problem. Sonny Kiriakis (Freddie Smith) just showed up to demand Dr. Wilhelm Rolf’s (William Utay) diary. In fact, Sonny threatened to kill Eve if she didn’t hand it over!

DOOL fans can expect Sonny to keep revving up the pressure. He’ll hope he can get the diary in time to save Will Horton’s (Chandler Massey) life, but Eve doesn’t have it.

Fortunately, Xander Cook (Paul Telfer) will cough up the diary and the formula it contains later this week. Until then, Days of Our Lives spoilers say Rafe Hernandez (Galen Gering) will make his stance clear.

Lani Price (Sal Stowers) planted a kiss on Rafe, but he’ll let her know he’s not interested on Monday. It hasn’t been that long since Rafe signed his divorce papers and Lani literally just got dumped.

Plus, Rafe may think Lani’s letting her connection to David Ridgeway cloud her view. She’s got some things to deal with, so jumping into a new romance probably isn’t wise. It sounds like another fantastic episode’s in store. We’ll give you updates as other Days news comes in. Stick DOOL and don’t forget to check CDL often for the latest Days of Our Lives spoilers, updates and news.