BY Heather Hughes on May 11, 2019 | Comments: one comment
Related : Days of Our Lives, Soap Opera, Spoiler, Television 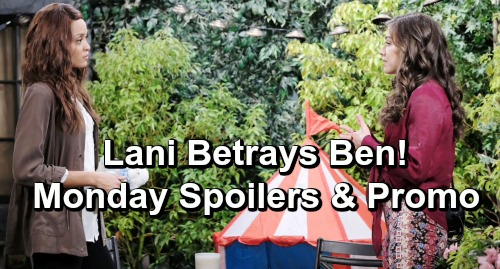 Days of Our Lives (DOOL) spoilers for Monday, May 13, tease that Ted Laurent (Gilles Marini) will have some concerns. He teamed up with Xander Cook (Paul Telfer) to fake Holly Jonas’ (Harlow and Scarlett Mallory) death, but Xander is obviously a wild card. Ted will worry that Xander will burn him somehow, especially when it comes to his relationship with Hope Hernandez (Kristian Alfonso).

Now that Hope and Rafe Hernandez’s (Galen Gering) marriage has fallen apart, Ted’s got his big shot. He won’t want Xander to blow this for him, but it’s out of his hands now. Xander does what he wants, so Ted will just have to go along for the ride.

Meanwhile, Xander will insist that Nicole Walker (Arianne Zucker) is still his wife and he’s still holding her confession over her head. Brady Black (Eric Martsolf) will protest, but Xander won’t be willing to back down – unless there’s something in it for him. Days of Our Lives spoilers say Xander and Brady will make a deal by the time Tuesday’s new Days episode rolls around, May 14, but Brady won’t like it one bit. 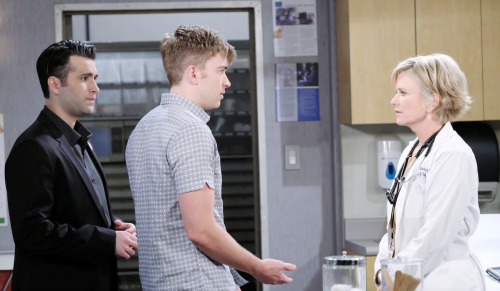 Over with Will Horton (Chandler Massey) and Sonny Kiriakis (Freddie Smith), they’ll get stunning news about Will’s tumor. Dr. Kayla Johnson (Mary Beth Evans) was surprised when she took another look at Will’s test results. There was something she missed before, so Kayla’s developed a theory about the cause of Will’s tumor. Days spoilers say she’ll leave Will and Sonny floored when she shares it.

It turns out the memory serum had some delayed side effects. This tumor is one of them in Kayla’s expert opinion, so she’ll tell Will her view of the situation and how it’ll influence his treatment moving forward. Elsewhere, Gabi Hernandez (Camila Banus) will make another move to seduce Stefan DiMera (Brandon Barash). She’ll be taken aback when her plan suddenly hits a brick wall.

Days of Our Lives spoilers state that Stefan will push Gabi away, so she’ll have to figure out how to win him over again. Across town, DOOL fans can expect a tight spot for Lani Price (Sal Stowers). She won’t want Ben Weston (Robert Scott Wilson) hanging out with David Ridgeway, so she’ll tell a lie to make sure it doesn’t happen.