BY Heather Hughes on May 10, 2019 | Comments: 2 comments
Related : Days of Our Lives, Soap Opera, Spoiler, Television 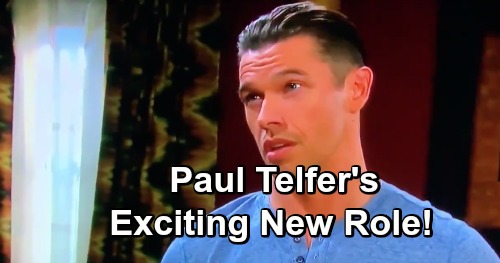 Days of Our Lives (DOOL) spoilers reveal that one NBC soap star has scored a fun primetime role. DOOL fans know Paul Telfer as the sinister yet lovable Xander Cook. He’s always stirring up trouble, but how can we hold it against him with that accent and charm? Xander has become a fan favorite, so it’s always great when he’s causing chaos in Salem.

There’s much more to come in Xander’s current stint, but Days viewers may want to check him out in another show, too. On Twitter, Telfer filled fans in on his latest gig. He’ll be featured in an upcoming episode of Agents of S.H.I.E.L.D., so he encouraged everyone to watch on Friday, May 10, and get prepared for his episode the following week.

“Be sure to tune in/DVR this Friday on ABC gang – you wanna make sure you know what’s going on so that the VERY IMPORTANT second episode (airing Friday 17th) will make sense,” Telfer said. His episode is called Windows of Opportunity, and it’s got an interesting plot. IMDB reveals, “While Fitz and Enoch struggle in space, Sarge and his team move forward with their mysterious mission on Earth.”

It’s great that Telfer’s doing some side projects and sharing his talent on primetime! We’ll let you know if he picks up any other exciting gigs, but you can keep catching Xander on DOOL for now. Days of Our Lives spoilers say Xander’s scheme is more complicated than anyone realizes.

Xander faked Holly Jonas’ (Harlow and Scarlett Mallory) death with a little help from Ted Laurent (Gilles Marini), but he’s got one more partner in crime. He wouldn’t let Ted in the loop on this person’s identity, but Kristen DiMera (Stacy Haiduk) is an excellent option. Days of Our Lives buzz suggests Kristen may even be masquerading as Nicole Walker (Arianne Zucker), so that could certainly shake things up.

Whatever the case, it sounds like some hot drama’s ahead as the twists and turns keep coming. Are you eager to see what else Xander has up his sleeve? Are you looking forward to Holly’s eventual return home? We’ll give you updates as other Days news emerges. Stay tuned to DOOL and don’t forget to check CDL often for the latest Days of Our Lives spoilers, updates and news.