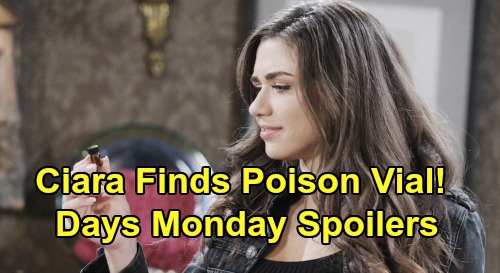 Days of Our Lives (DOOL) spoilers for Monday, October 28, tease that Jordan Ridgeway (Chrishell Hartley) will panic over Rafe Hernandez’s (Galen Gering) collapse. He suddenly keeled over in the kitchen, so it won’t be long until Jordan realizes he got the poisoned cupcake. She’ll struggle to understand how her carefully thought out plan went south, but DOOL fans know exactly what happened.

Arianna Horton (Harper and Sydnee Udell) admitted she switched the nametags so the girls at the party got more frosting. Smart kid! Of course, Ari couldn’t have known David Ridgeway’s (Jaxton and Dexter Ellis) “mean mommy” tainted one of them. Rafe got the cupcake meant for Ciara, so Jordan will fear for his life and worry about protecting her secret.

While Rafe’s rushed to the hospital for medical attention, Ciara will make a startling discovery. She’ll find the poison vial, which Jordan planted in Ben Weston’s (Robert Scott Wilson) coat pocket. Days spoilers say Ciara won’t be sure what it is at first, but she’ll want some answers. Fortunately, Ben’s been framed enough times for Ciara to realize there’s probably another explanation.

DOOL viewers can expect Ben and Ciara to put their heads together on this. Once they get updates on Rafe’s predicament, the puzzle pieces will start coming together. Days of Our Lives spoilers say that poison vial will quietly be sent to the lab for testing. Meanwhile, Rafe will also suspect Jordan was behind his crisis. His test results will point to poisoning, so he’ll start to realize Ben was right all along.

Days of Our Lives spoilers state that Rafe will have a chat with JJ Deveraux (Casey Moss), who’ll agree to secretly investigate. JJ’s digging will bring danger later in the week, so don’t miss all the action. In the meantime, Haley Chen (Thia Megia) will bump into John Black (Drake Hogestyn) and Marlena Evans (Deidre Hall). She’ll mention her recent encounter with Hope Brady (Kristian Alfonso), which was certainly peculiar.

It looks like Haley will point out Hope was smoking, so Marlena and John will know something strange is going on. They’ll resolve to track Hope down and get to the bottom of it. Too bad Hope is long gone – at least for now! Hope has mentally transformed into Princess Gina, so she’ll be busy telling Dr. Wilhelm Rolf (William Utay) she wants to reunite with John. Princess Gina was in love with John years ago, so she’ll make it her mission to get him back.

Finally, Julie Williams (Susan Seaforth Hayes) will offer Gabi DiMera (Camila Banus) her gratitude. She’ll thank Gabi for giving up Stefan DiMera’s (Brandon Barash) heart, but she won’t know Gabi’s using it to manipulate Lani Price (Sal Stowers). Gabi can control Julie’s pacemaker, so Lani will have to make some tough choices in the week ahead.

It sounds like some exciting scenes are coming up. We’ll keep you posted as other Days news emerges. Stay tuned to DOOL and don’t forget to check CDL often for the latest Days of Our Lives spoilers, updates and news.