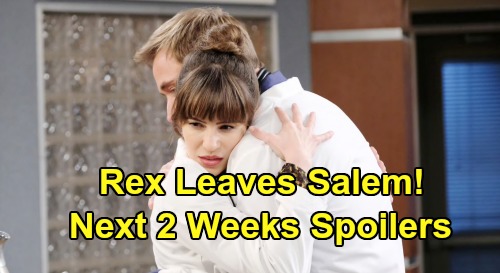 Days of Our Lives (DOOL) spoilers for the next two weeks tease that some big moments are on the way. During the week of July 29-August 2, Sarah Horton (Linsey Godfrey) will be in bed with Rex Brady (Kyle Lowder) when she makes an awful slip of the tongue. When Rex tells Sarah he loves her, she’ll reply that she loves him, too…but she’ll call him by Eric Brady’s (Greg Vaughan) name!

Sarah will decide to admit her feelings for Eric and deal with the backlash. Rex may wonder why she married him if Eric was the one she really wanted. The fact that Sarah did it because she thought Eric and “Nicole Walker” (Arianne Zucker) would still get together should make matters worse. Of course, Rex’s cheating shattered his relationship to begin with, so maybe you reap what you sow.

Over with Gabi Hernandez (Camila Banus) and Stefan DiMera (Brandon Barash), they’ll tie the knot in preparation for Mr. Shin’s (Michael Hagiwara) decision. “Nicole” and Tony DiMera (Thaao Penghlis) will do the same, so the four of them will go before this DiMera board member to hear which bride’s going to be DiMera’s new CEO.

Other Days spoilers state that Jack Deveraux (Matthew Ashford) will remain furious with Eve Deveraux (Kassie DePaiva). She’ll shatter the serum vials as promised and even destroy the hospital notes for good measure. Jack will lash out at Eve by once again demanding a divorce and firing her from the police commissioner job. It won’t be long until Eli Grant (Lamon Archey) takes Eve’s place.

During the week of August 5-9, Days of Our Lives spoilers say a tragedy will hit Salem. Ted Laurent’s (Gilles Marini) heated confrontation with Kristen DiMera (Stacy Haiduk) and Tony will go awry. As Kristen’s rage grows more intense, things will go too far. It sounds like Ted could end up dead if he’s not careful!

Later, Kristen will get busted with incriminating evidence. Perhaps she’ll be trying to destroy proof of her recent conflict with Ted. Kristen would have a good reason to if Ted lost his life in the battle. Over with Gabi, she’ll wrestle with her feelings for Stefan DiMera (Brandon Barash), but part of her will still hate him as well. Gabi will have to decide which side’s going to win out.

Next, Days of Our Lives spoilers say Rex will decide to leave Salem behind and start a new chapter. He won’t think there’s any hope of making things work with Sarah, so they’ll apparently get their marriage annulled. Kyle Lowder’s final DOOL airdate is August 9, so when Rex exits Salem he is leaving Days as well, unless he returns to film again. As for Sarah, she’ll pour her heart to Eric and leave him with a choice to make.

Days spoilers state that Anna DiMera (Leann Hunley) will also make a comeback, so DOOL will soon deliver scenes with her old love, Tony. Finally, Brady Black (Eric Martsolf) will ditch his protective shield with “Nicole.” Thanks to being psychically attacked by Eric the week before, Brady may think brother friction is just their new normal. Whatever the case, Brady will surrender to “Nicole’s” aka Kristen’s temptation.

It sounds like the next two weeks will be packed full of drama. We’ll give you updates as other Days news comes in. Stay tuned to DOOL and don’t forget to check CDL often for the latest Days of Our Lives spoilers, updates and news.