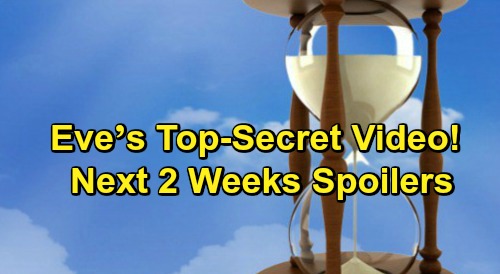 Days of Our Lives (DOOL) spoilers for the next two weeks tease that some spooky moments are on the way. During the week of March 4-8, Chloe Lane (Nadia Bjorlin) will find evidence that someone’s following her. She’ll grow concerned, but Rex Brady (Kyle Lowder) will end up coming to her rescue.

Rex will corner a man with a gun and demand some answers. It’ll seem like a stalker, but it’ll really just be someone Brady Black (Eric Martsolf) hired to keep tabs on Chloe. Stefan DiMera (Christopher) will also make his intentions known this week. He’ll push for more than friendship and plant a hot kiss on Chloe at the DiMera mansion.

After Gabi Hernandez (Camila Banus) kills the mood, Stefan will try to push her buttons. He’ll drive Gabi up the wall, so she should be more open to the takedown plan Brady pushes. However, Ben Weston (Robert Scott Wilson) will take steps to keep Ciara Brady (Victoria Konefal) at a distance. She hated when he was working as Stefan’s security chief, so he’ll hope to get rehired and prove their relationship is over. 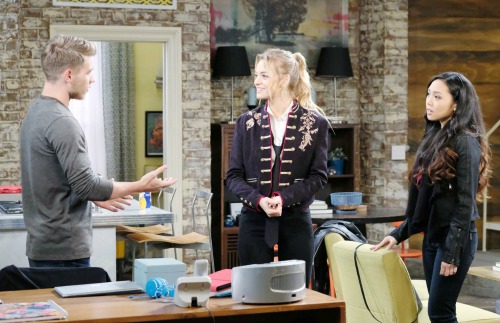 Other Days of Our Lives spoilers say John Black (Drake Hogestyn) will pull off a sneaky move. He’ll find something in Diana Cooper’s (Judith Chapman) safe that’s of importance. Will Horton (Chandler Massey) and Sonny Kiriakis (Freddie Smith) will also stop by Diana’s room and hope for ammo against Leo Starke (Matthew Cooper).

During the week of March 11-15, Stefan will be encouraged by the way things are going with Chloe. He’ll feel like maybe he’s got a real chance at love again. Stefan won’t want Ben to give up on love either. He’ll offer some solid advice and leave Ben longing for a life with Ciara.

Other Days of Our Lives spoilers state that Will and Sonny will get a lucky break. They’ll have a reason to celebrate, so they might score at least a minor victory against Leo Starke (Greg Rikaart). Unfortunately, Diana will take her own plot to the next level. She’ll have a deadly scheme in mind, so Dr. Marlena Evans (Deidre Hall) will land in the hospital soon. 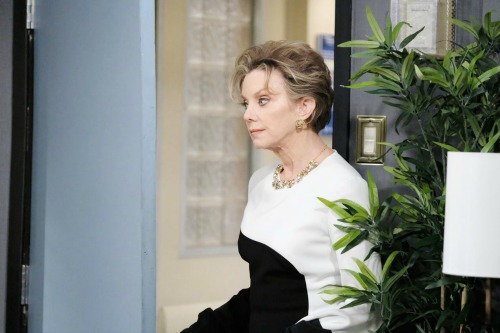 Across town, Tripp Dalton (Lucas Adams) will want to help Haley Chen (Thia Megia). She’ll remain panicked over the possibility of getting deported, so Tripp will think she needs to accept his big favor. He’ll also grill Claire Brady (Olivia Rose Keegan), whose jealousy will be on full display. Claire will even plot with Eve Donovan (Kassie DePaiva) in hopes of pushing Haley out of the picture.

Speaking of Eve, Days spoilers say she’ll make a video that adds to the betrayal. Eve will be glad to have Claire’s assistance as she works to make Jack Deveraux (Matthew Ashford) Salem’s new mayor. Nevertheless, their DOOL alliance should backfire eventually!

It sounds like the next two weeks will bring plenty of excitement. We’ll give you updates as other Days news comes in. Stay tuned to DOOL and don’t forget to check CDL often for the latest Days of Our Lives spoilers, updates and news.