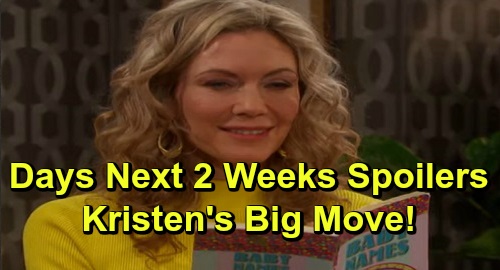 Days of Our Lives (DOOL) spoilers for the next two weeks tease that some dark moments are ahead in Salem. During the week of September 30-October 4, Vivian Alamain (Robin Strasser) will make a bold move. She’ll escape as the cops close in with a little help from Gabi DiMera (Camila Banus).

Later, Stefan DiMera (Brandon Barash) will express his gratitude to Gabi. They’ll celebrate their love with a romantic night, but tragedy will strike later. Days of Our Lives spoilers say Vivian and Lani Price (Sal Stowers) will face off in the park. They’ll pull guns on each other, which will leave Stefan caught in the line of fire. He’ll be shot and rushed to the hospital, where he’ll face a grim prognosis.

In the meantime, Julie Williams (Susan Seaforth Hayes) will have one last wish for Doug Williams (Bill Hayes). She’ll be fading fast, but Doug will manage to grant this dying request. As for Kate Roberts (Lauren Koslow), she’ll get a visit from the man who saved her life, Dr. Wilhelm Rolf (William Utay). It probably won’t be long until Kate realizes Dr. Rolf is the reason for her miracle cure.

During the week of October 7-11, Gabi will have to face reality. There’ll be no hope for Stefan’s recovery, so Eli Grant (Lamon Archer) will seek a massive favor. He’ll probably wonder if Gabi would be willing to donate Stefan’s heart to Julie. It sounds like Gabi will give the green light, so she’ll have to bid her love farewell soon.

Over with Ciara Brady (Victoria Konefal), she’ll be on edge when she finds herself stuck in a tight spot with Jordan Ridgeway (Chrishell Hartley). Ciara may be trapped with no way out, but perhaps forcing them to talk could be helpful. Time will tell, but Ciara will definitely battle some nerves here.

As for Hope Brady (Kristian Alfonso), Days of Our Lives spoilers say something strange is about to go down. Dr. Rolf will lure Hope to a secret location, where’ll he’ll snatch her and ultimately hold her hostage. Hope will be desperate to get away, but Dr. Rolf will have other ideas – and they won’t end well for Hope!

Back with Brady, he’ll drop Kristen’s pregnancy bomb on Victor Kiriakis (John Aniston). Brady’s updates certainly won’t please his granddad! Days spoilers say Victor may fume all over again after Brady sets Kristen up at the mansion. She’ll be living the high life thanks to her impending bundle of joy.

The next two weeks should bring some exciting scenes. We’ll keep you posted as other Days details emerge. Stay tuned to DOOL and don’t forget to check CDL often for the latest Days of Our Lives spoilers, updates and news.