Days of Our Lives Spoilers Next 2 Weeks: ‘Nicole’ and Xander’s Plot Pays Off, But She’s Kristen DiMera – Eve’s Revenge on Ben

BY Heather Hughes on May 11, 2019 | Comments: one comment
Related : Days of Our Lives, Soap Opera, Spoiler, Television 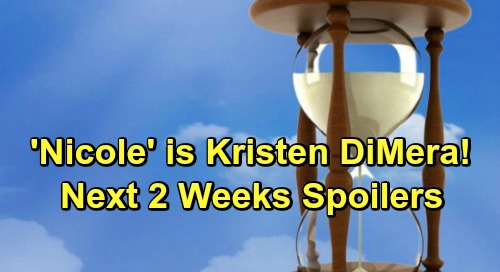 Days of Our Lives (DOOL) spoilers for the next two weeks tease that the drama’s about to heat up in Salem. During the week of May 13-17, Sarah Horton (Linsey Godfrey) will console Eric Brady (Greg Vaughan). He’ll be crushed as Nicole Walker (Arianne Zucker) continues to blame him for Holly Jonas’ (Harlow and Scarlett Mallory) “death.” Sarah will assure Eric that it’s not his fault and offer to help if she can.

DOOL fans know Sarah would love a chance to be with Eric, but she’ll put her personal feelings aside in this moment. She’ll see how miserable Eric is and genuinely root for his happiness – even if that means convincing Nicole to forgive him. Of course, Sarah won’t succeed, but it should mean a lot that she tried.

Over with Brady Black (Eric Martsolf), he’ll make a deal with Xander Cook (Paul Telfer). Days of Our Lives spoilers say Brady will let Xander have almost anything he wants. In exchange, Brady will secure Nicole’s freedom and earn her deep gratitude. However, DOOL viewers will soon find that Nicole isn’t quite herself…

In the meantime, Hope Hernandez (Kristian Alfonso) will notice Rafe Hernandez (Galen Gering) took off his wedding ring. She’ll take that as her cue to start divorce proceedings. Meanwhile, Haley Chen (Thia Megia) will lock lips with JJ Deveraux (Casey Moss) as she bids him farewell. She’ll also learn Melinda Trask (Laura Kai Chen) is her mother and not her sister before the deportation process starts.

Days of Our Lives spoilers say Melinda’s dark side will take over as she clutches her gun and prepares to track down Jack Deveraux (Matthew Ashford). Back with Xander, he’ll flirt with Sarah and hope they can hit the sheets again. Sarah will undoubtedly turn Xander down, but he’ll have bigger plans anyway.

During the week of May 20-24, Xander’s mystery partner will be revealed – at least to fans. The rest of Salem will likely remain in the dark. Since Nicole and Xander will celebrate their plot’s success later, it makes since that she’s not who she claims to be. Is “Nicole” just Kristen DiMera (Stacy Haiduk) in a very believable mask?

Other Days of Our Lives spoilers say Maggie Kiriakis (Suzanne Rogers) will fall off the wagon. She’ll no longer be able to resist taking a drink…and another…and another. It looks like Maggie will be plastered pretty soon, so Brady will spot her passed out drunk.

We should also note that Jack will be the winner of the election, so he’ll be on even more of a power trip. Elsewhere, Gabi Hernandez (Camila Banus) will join forces with Kate Roberts (Lauren Koslow). They’ll work together to make sure Chloe Lane (Nadia Bjorlin) finds Gabi in bed with Stefan and rejects him for good.

Next, Eve Donovan (Kassie DePaiva) will get blamed for Claire Brady’s (Olivia Rose Keegan) failed relationship. Claire will insist it’s Eve’s fault that Tripp dumped her, so she obviously won’t be happy. As for Eve, she’ll be on a mission to make Ben pay. He didn’t suffer enough for killing Paige Larson (True O’Brien) in Eve’s eyes, so she’ll hope to get her revenge at last.

It sounds like some bombshells are brewing on the NBC soap. We’ll give you updates as other Days news comes in. Stay tuned to DOOL and don’t forget to check CDL often for the latest Days of Our Lives spoilers, updates and news.