BY Heather Hughes on May 25, 2019 | Comments: one comment
Related : Days of Our Lives, Soap Opera, Spoiler, Television 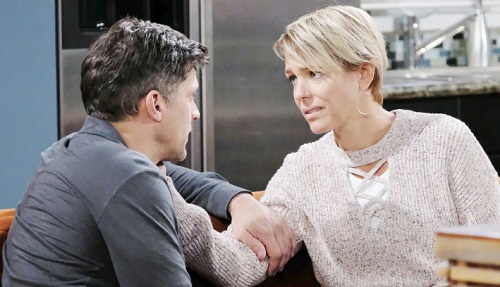 Days of Our Lives (DOOL) spoilers tease that Kristen DiMera (Stacy Haiduk) will continue her sneaky mission. She’s already gone to great lengths to pull it off. Kristen has been donning a Nicole Walker (Arianne Zucker) mask and tasked Xander Cook (Paul Telfer) with faking Holly Jonas’ (Harlow and Scarlett Mallory) death. Xander got an assist from Ted Laurent (Gilles Marini), but Kristen is running the show here.

Of course, DOOL fans might be wondering exactly what Kristen wants and how she plans to get it. The first part is simple: Kristen wants Brady Black (Eric Martsolf) back. As for how Kristen plans to make that happen, it’s a bit more complicated. Kristen can’t just snap her fingers and make it happen. That’s why she’s been forced to show the journey of “Nicole’s” intense grief.

Days spoilers say Kristen will have a close call when drunk Maggie Kiriakis (Suzanne Rogers) spots her without the mask. However, she’ll manage to smooth things over and focus on the next challenge. Eric Brady (Greg Vaughan) will arrive in hopes of talking things out. He’ll beg “Nicole” to understand that he loved Holly and never wanted this to happen.

“Nicole” will make it clear that she hates Eric and that’s not going to change. Kristen will shatter Eric’s heart, but she won’t care. He’ll just be collateral damage in her scheme to win Brady over. Days of Our Lives spoilers say Eric will be shaken up after this encounter. He’ll get that “Nicole” is grieving, but he’ll still be frustrated by her refusal to listen to him.

“Nicole’s” reliance on Brady will be even more frustrating. Eric will wish he could be the one “Nicole” turns to, but she’ll naturally keep shutting him out. Nevertheless, Kristen will realize she has to take this further if she wants to pull Brady closer. He’ll still have walls up since he’ll want to be loyal to his brother.

Kristen will need a reason for Brady to turn against Eric, so she’ll give him one. She’ll stage some sort of incident that makes Eric look terrible. During the week of June 3-7, “Nicole” will claim Eric attacked her.

Perhaps Kristen will hurt herself to sell it – kind of like that time Gabi Hernandez (Camila Banus) hilariously smacked herself in the face with a tray and blamed Abigail DiMera’s (Kate Mansi) alter. It’s possible “Nicole” could make verbal attack accusations, but those don’t seem like enough. She needs to push Brady over the edge and make him see Eric as the enemy.

Days of Our Lives spoilers say Kristen will just want to lock in Brady’s love. She’ll think she can figure out a way to tell him the truth down the road, but the important part is recreating that spark. You can bet Kristen’s mission will go horribly wrong at some point, so stay tuned.

It sounds like some fantastic drama’s ahead. We’ll give you updates as other Days news comes in. Stick with DOOL and don’t forget to check CDL often for the latest Days of Our Lives spoilers, updates and news.