Days of Our Lives Spoilers: Nicole Dumps Eric, Blames Him For Holly’s Death – Leans on Brady 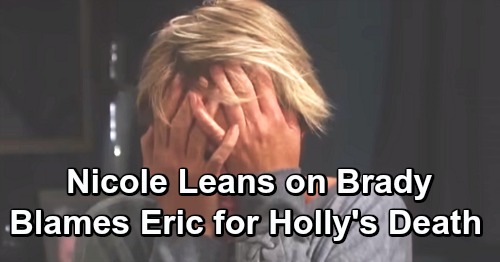 Days of Our Lives (DOOL) spoilers tease that Nicole Walker (Arianne Zucker) will face the worst devastation of her life. During the week of May 6-10, it looks like she’ll lose the one thing that matters most to her. Nicole finally achieved her dream of being a mom, but it may be ripped away in an instant.

DOOL fans can expect this kidnapping plot to take a terrible turn. There’ll be a horrific accident next week, which will result in a grim discovery. It seems like a done deal that Holly Jonas (Harlow and Scarlett Mallory) will be dead or at least presumed dead at this point. There are plenty of Days spoilers to back up that idea.

For starters, we know there’ll be major, lasting consequences due to the search for Holly. Rafe Hernandez (Galen Gering) will go against Hope Hernandez’s (Kristian Alfonso) orders, so that’ll spark this tragedy. It’ll lead to the end of “Rope’s” marriage, but other relationships will be affected as well.

Holly’s demise may cause a huge setback for Nicole and Eric Brady (Greg Vaughan). Days of Our Lives spoilers reveal that Nicole will explode at Eric next week, so it appears she’ll be playing the blame game. After all, Nicole made Eric promise to take care of Holly before her presumed death in that warehouse explosion.

Instead, Eric stepped aside for Chloe Lane (Nadia Bjorlin), who ended up getting chased by a violent, vengeful drug cartel. Chloe also put Holly at the DiMera mansion and trusted Stefan DiMera (Brandon Barash) could keep her safe. Nicole may trace all of this back to Eric and insist that he let her down. She may feel like it’s Eric’s fault that Holly’s gone.

Later, Days of Our Lives spoilers say Xander Cook (Paul Telfer) will make an interesting discovery. He’ll catch Brady Black (Eric Martsolf) consoling Nicole, so Xander may rub that in the next time he sees Eric. Could Brady and Nicole rekindle their spark? Will this just be some friendly comforting instead?

Either way, Days won’t keep “Ericole” apart forever. Nicole and Eric are endgame, so this is all just part of an angsty storyline for a fantastic pairing. It sounds like fans should just settle in and watch the drama unfold. We’ll give you updates as other news comes in. Stay tuned to DOOL and don’t forget to check CDL often for the latest Days of Our Lives spoilers, updates and news.