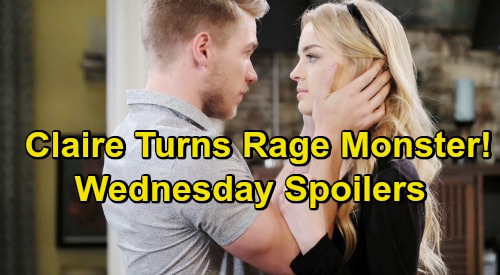 Days of Our Lives (DOOL) spoilers for Wednesday, May 1, tease that Valerie Grant (Vanessa Williams) has a surprise in store for Abe Carver (James Reynolds). She’ll show up in Salem just before Abe’s big debate gets underway, so he’ll be excited to see her. Their long-distance relationship has been strained, but they’ll both hope this DOOL visit can help them reconnect.

Unfortunately, Jack Deveraux (Matthew Ashford) will derail that plan. He’ll have a surprise of his own during the debate and it’s sure to leave Valerie and Abe reeling. Days of Our Lives spoilers say Jack will put up a photo he secretly snapped. He caught that kiss between Abe and Sheila Watkins (Tionne “T-Boz” Watkins), so he’ll post it for all to see on the screen behind him.

Eve Donovan (Kassie DePaiva) will happily support this low blow and the poll boost it could give her hubby. She’ll feel like things are really going Jack’s way, but overconfidence isn’t the best idea. Days spoilers state that Jack’s campaign will take a major hit later this week.

Meanwhile, Claire Brady (Olivia Rose Keegan) will get some infuriating news. She’ll get kicked out of the loft, so that’ll be once source of outrage. However, Claire will also find out Tripp Dalton (Lucas Adams) and Haley Chen’s (Thia Megia) marriage could last for years. She’ll hit the roof when she realizes she may not be getting her way anytime soon.

Other Days of Our Lives spoilers say Eli Grant (Lamon Archey) will be thrown for a loop. He’ll be taken aback when he gets updates on Lani Price’s (Sal Stowers) stunning career move. Lani will announce she’s taking a leave of absence so she can help care for David. She’ll hope Eli will back her up on this, but he obviously won’t.

Lani will want to devote all her time to Jordan Ridgeway’s (Chrishell Hartley) baby, so she’s sure to get an earful from angry Eli. Days fans can expect an explosive argument, so stay tuned for more drama. We’ll keep you posted as other details emerge. Stick with DOOL and don’t forget to check CDL often for the latest Days of Our Lives spoilers, updates and news.