Days of Our Lives Spoilers: Paul Telfer’s Great New Project – See What Xander Does With Carmen Cusack In Spare Time

BY hellodrdavis on October 2, 2019 | Comments: one comment
Related : Days of Our Lives, Soap Opera, Spoiler, Television 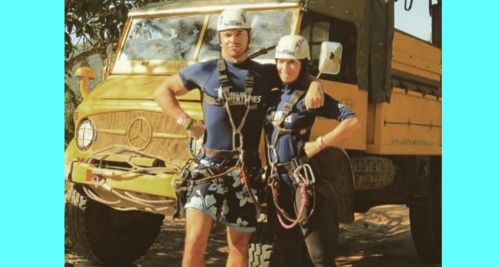 Days of Our Lives (DOOL) spoilers has some fantastic news to pass on about a popular DOOL star. Paul Telfer, who portrays Xander Kiriakis on the NBC soap, has recently announced a new project that he and his wife are taking on. It’s a for a great cause aimed at providing homes for low-income veterans and their families.

Telfer recently announced the news on his social media feeds. He posted a photo of himself and his wife, actress Carmen Cusack, decked out in hard hats and construction gear. The photo was from an earlier mission, and in the caption, Telfer explained. “In this throwback photo, @cusackcarmen and I donned hard hats for a bit of holiday fun,” he said. “But on October 5th, we’re looking forward to wearing heard hats for a fantastic cause – @homes4families.”

“We’ll be spending the day building a home for a deserving veteran family,” he continued. “If you would like to support our efforts, donations are needed to cover the cost of the building materials, and we’d be honored to have your support…please visit our personal donation page at https://www.firstgiving.com/fundraiser/carmencusackand-paultelfer/Celebs-4-Vets-Summer-2019-Palmdale.”

It certainly sounds like a wonderful cause benefiting veterans and their families. Homes 4 Families has a great mission – to build resiliency, economic growth, neighborhoods, and homes for veteran families.

The organization recognizes the enormous sacrifice made by veterans and their families, and strives to empower them to enter the middle class through affordable home ownership.

Telfer and Cusak will be volunteering on a team called “Celebs 4 Vets” that includes other actors and people in the entertainment industry. Their team includes actress Jeri Ryan, who appeared in Star Trek: Voyager and who will soon reprise the role on Star Trek: Picard in 2020. She’s also appeared in Boston Public and Law and Order: Special Victims Unit.

Team Has Raised More Than $11,000 To Support The Charity

And if you’re not familiar with Telfer’s wife, Carmen Cusack, she’s a Tony and Grammy nominated performer in her own right. She’ll be seen in the upcoming feature film A Beautiful Day In The Neighborhood alongside Tom Hanks, and in the second season of the web series Sorry For Your Loss, which has recently premiered.

All together, the team has raised more than $11,000 to support their home-building mission on October 5th. It should be a great day for the team as they further the mission of Homes 4 Vets and likely have a great time in the process.

We wish Telfer, Cusak, and the rest of the Celebs 4 Vets team all the best in their wonderful endeavor. Stay tuned to DOOL and don’t forget to check CDL often for the latest Days of Our Lives spoilers, updates, and news.

Last time @carmen_cusack and I wore hardhats it was just for some vacation fun. But on October 5th, We’ll be building a home for a veteran family with @Homes4Familes.

We’d be honored to have your support, please visit our donation page: https://t.co/I16M3KuPKv pic.twitter.com/JHHu8Pj8LD