BY hellodrdavis on December 23, 2019 | Comments: one comment
Related : Days of Our Lives, Soap Opera, Spoiler, Television 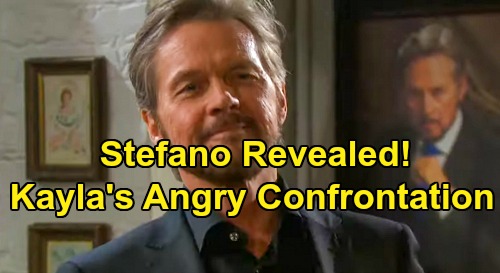 Days of Our Lives (DOOL) spoilers tease that Kayla Brady (Mary Beth Evans) is in for a huge shock when she finally sees her ex-husband Steve Johnson (Stephen Nichols). As DOOL viewers know, Stefano DiMera is now inhabiting Steve’s body, so Steve really isn’t Steve right now, but of course Kayla’s going to have some serious questions for “Stevano.”

Kayla has recently taken a big step and moved on with her life. She’s now in a romantic relationship with Justin Kiriakis (Wally Kurth), and according to DOOL spoilers, the two of them will spend a romantic Christmas together. But it looks like Kayla and others are going to get a major shocker on New Year’s Eve, when Stevano is revealed.

Exactly how it’s going to go down remains to be seen, but Days of Our Lives spoilers indicate that there’s going to be a big surprise for several Salemites on New Year’s Eve, with an unexpected couple crashing Julie Williams (Susan Seaforth Hayes) and Doug Williams’ (Bill Hayes) New Year’s Eve party. And it’s certainly looking like one-half of that couple is going to be Stevano.

DOOL spoilers for shortly after New Year’s Eve say that John Black (Drake Hogestyn), Marlena Evans (Deidre Hall), Kayla, and Justin will be absolutely stunned by Steve’s return. This indicates that they won’t immediately realize that Steve is actually Stefano, which makes sense, since he’ll be Steve in their eyes.

But soon, it should become apparent that Steve is no longer Steve. He might announce that he’s Stefano, or the person he crashes the New Year’s Eve party with might do the honors of introducing him as Stefano. DOOL buzz is that the person who accompanies Stevano might be Kristen DiMera (Stacy Haiduk), who would be someone who’d probably be quite proud to re-introduce her father back into Salem society.

At any rate, DOOL spoilers say that Kayla will get some one-on-one time with Stevano. Of course, Kayla will have plenty on her mind. First off, she’ll probably be wondering what’s up with Steve’s eye, since he now has both eyes and no more patch. And if he does reveal himself as being Stefano, then Kayla’s going to want to know what’s happened to the real Steve. She might wonder if he’s still there somehow, or if his memories and personality have been totally eradicated.

Whether she thinks she’s talking to Steve or Stefano, she’s going to have some major questions and will probably seriously lash out. It will be interesting to see how this all goes down and whether Stevano decides to reveal himself or pretend to be Steve. Of course, if he does reveal himself, he’s going to have some serious backlash from a lot of angry people who just want Steve back.

What do you think is going to go down on New Year’s Eve? Stay tuned to DOOL and don’t forget to check CDL often for the latest Days of Our Lives spoilers, updates, and news.