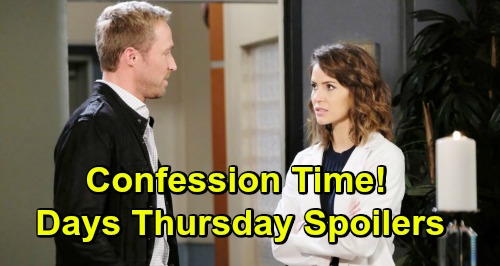 Days of Our Lives (DOOL) spoilers for Thursday, March 28, tease that Sarah Horton (Linsey Godfrey) will come clean to Rex Brady (Kyle Lowder). She was livid when she realized Brady Black (Eric Martsolf) was blackmailing Eric Brady (Greg Vaughan), so she’s decided to take matters into her own hands. Sarah doesn’t want Brady to have that kind of power over Eric, which means a major confession’s ahead.

DOOL fans can expect some tense moments as Sarah describes what happened. She’ll reveal that she kissed Eric when he was feeling vulnerable and assure Rex that this is all on her. Sarah won’t want Rex to blame his brother when everything is one-sided. Of course, Sarah’s mistaken about that. Eric is trying to honor the promise he made to God, but he has some deep feelings for Sarah deep down.

Since Rex got Mimi Lockhart (Farah Fath) pregnant and slept with Sarah’s sister, Noelle Curtis, he really has no room to talk. Rex can surely deal with a little smooch in the hospital chapel. However, Days spoilers hint that he’ll be keeping a close eye on Eric and Sarah from now on. They’ll have to be careful since Rex will spot every red flag!

Other Days of Our Lives spoilers say Hope Hernandez (Kristian Alfonso) will open up to Jennifer Horton (Melissa Reeves). She’ll have Ted Laurent (Gilles Marini) on her mind, so she’ll share how she’s feeling. Hope may point out that the recently tried to put Ted in his place. She warned him to stop all the flirting, but part of Hope certainly seems drawn to the guy.

While Jennifer lends a sympathetic ear, Rafe Hernandez (Galen Gering) will make trouble for his rival. He’ll blab about some work issue that infuriates Abe Carver (James Reynolds), so Ted will be on the hot seat. Days of Our Lives spoilers say Ted won’t appreciate Rafe ratting him out, but he’ll probably just channel that anger into whatever else he has planned for Hope.

Rafe will do some plotting as well, so this won’t be the last time he throws Ted for a loop. Over with JJ Deveraux (Casey Moss), he’ll pine for Haley Chen (Thia Megia) and wish he was her groom instead of Tripp Dalton (Lucas Adams). JJ has fallen for Haley, but she feels like Tripp is the better option here. To make matters worse, real feelings seem to be developing between Tripp and Haley.

If JJ picks up on those feelings, it could add to his heartbreak in Thursday’s gripping episode. We’ll give you updates as other Days news comes in. Stay tuned to DOOL an don’t forget to check CDL often for the latest Days of Our Lives spoilers, updates and news.