BY hellodrdavis on October 2, 2019 | Comments: one comment
Related : Days of Our Lives, Soap Opera, Spoiler, Television 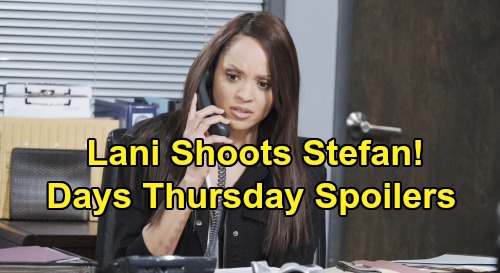 Days of Our Lives (DOOL) spoilers for Thursday, October 3, tease that Brady Black (Eric Martsolf) will be feeling tormented. As DOOL viewers know, he’s just found out that Kristen DiMera (Stacy Haiduk) is pregnant, and he’s beside himself. After a heated exchange with Kristen, he’ll turn to a familiar face for advice. He’ll seek out Marlena Evans (Deidre Hall) and fill her in on Kristen’s pregnancy. Of course, Marlena will probably be horrified by the news, but still she’ll lend an ear and comfort Brady as best she can.

Meanwhile, Ciara Brady (Victoria Konefal) will find herself in a terrifying situation. She will nearly be run down by a speeding car as she’s walking to her vehicle. Ben Weston (Robert Scott Wilson) witnessed the whole thing, but it looks like he won’t have gotten a good glimpse of the car or the driver. Thankfully, Ciara will wind up being fine, but she’ll be pretty rattled, and so will Ben.

Of course, this will have occurred just after Ben had a heated exchange with his sister Jordan Ridgeway (Chrishell Hartley) during which Jordan admitted to killing their mother. Ben warned a defiant Jordan to stay away from Ciara, and so naturally the first thing that will cross Ben’s mind is that Jordan likely was driving the car that nearly hit Ciara.

On Thursday’s DOOL episode, Ciara and Ben will contact Lani Price (Sal Stowers) and report the incident, and they’ll tell her that they think it was Jordan who tried to kill Ciara. Of course, for Lani to be able to do anything about it, there would need to be some solid evidence that it was Jordan who was behind the wheel. Unfortunately, it looks like such evidence will be lacking, which will leave Ben and Ciara frustrated, not to mention scared.

Finally, Stefan DiMera (Brandon Barash) will wind up in the wrong place at the wrong time. As DOOL viewers know, his mother Vivian Alamain (Robin Strasser) is currently on the run from the police for the attempted murder of Kate DiMera (Lauren Koslow). Vivian attempted to seek shelter from Kristen, but it looks like she’ll soon be back on the streets, because DOOL spoilers say that she’ll encounter Lani in the park.

Lani will spot a suspicious-looking woman who fits Vivian’s description, and she’ll proceed to hold the woman (who turns out to be Vivian) at gunpoint. But since Vivian is also armed, the two will wind up pointing their weapons at each other, while Lani orders Vivian to drop hers. According to DOOL spoilers, Vivian won’t comply, forcing Lani to discharge her weapon.

But at the moment that Lani fires, Stefan will happen upon the scene and leap in front of the oncoming bullet in a knee-jerk reaction to save his mother. Unfortunately, that means that Stefan will be hit by the bullet, and he’ll suffer serious injuries as Lani stands there horrified by what’s just transpired. From there, Stefan will be rushed to the hospital, as his life hangs in the balance.

It sounds like a lot of DOOL drama is heating up for Thursday’s episode, so stay tuned! We’ll give you updates as DOOL news comes in. Stick with the NBC soap and don’t forget to check CDL often for the latest Days of Our Lives spoilers, updates, and news.