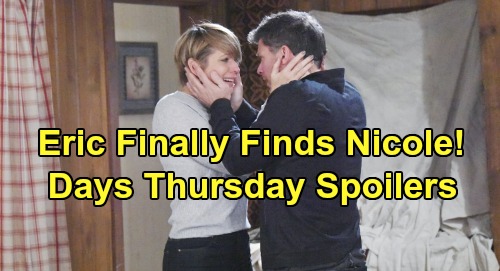 Victor Kiriakis (John Aniston) isn’t pleased about Ciara Brady’s (Victoria Konefal) latest boyfriend, so he intends to do something about it. He was probably hoping things would just fizzle between them by now, but Ben and Ciara are falling more in love every day. That has to be concerning to Victor due to Ben’s violent history. Although Ben’s reformed now, Victor will still view him as a serious threat.

Days of Our Lives spoilers say Xander will whack Ben in the head and knock him out cold. He’ll deliver Ben to Victor, who will deliver deadly orders on Friday’s new Days episode, September 6. Victor will push Xander to murder Ben, so it looks like a gripping cliffhanger will wrap the week up.

In the meantime, Days spoilers say Eric’s mission will continue. With Vivian’s help, Eric managed to get in the guard’s phone. It should contain some clues that’ll point him in Nicole Walker’s (Arianne Zucker) direction, so that’s great news. Nicole is at an old farmhouse somewhere nearby, which means an “Ericole” reunion is almost here.

Days of Our Lives spoilers say Eric will finally find Nicole and Holly Jonas (Harlow and Scarlett Mallory). Eric will be overcome with emotion, so DOOL viewers won’t want to miss these powerful scenes. Back in Salem, Sarah Horton (Linsey Godfrey) will realize something deeply unsettling. She’ll do some quick math and determine that she’s late, so pregnancy panic will hit.

Sarah indeed has a bun in the oven, and a pregnancy test will confirm that soon enough. While Sarah processes that revelation, Stefan DiMera (Brandon Barash) will enjoy a heartfelt reunion with his mother. Vivian will be over the moon when she rejoins her son in town, but trouble’s brewing thanks to her looming revenge on Kate Roberts (Lauren Koslow).

It sounds like some exciting scenes are on the way. We’ll give you updates as other Days details emerge. Stay tuned to DOOL and don’t forget to check CDL often for the latest Days of Our Lives spoilers, updates and news.