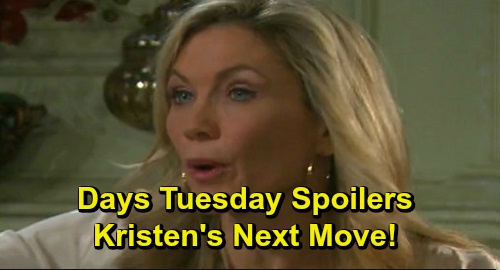 Days of Our Lives (DOOL) spoilers for Tuesday, September 24, tease that Jordan Ridgeway (Chrishell Hartley) will make a terrifying declaration. She’ll vow to kill anyone who dares to hinder her bond with her son. DOOL fans know Jordan has custody of David Ridgeway again, and she has no intention of letting anybody stand in her way – especially Ciara Brady (Victoria Konefal).

Ben Weston (Robert Scott Wilson) will grow increasingly concerned about Ciara’s safety, which will bring a warning on Tuesday. Days spoilers say Ben won’t want Ciara to be alone with Jordan. He’ll contend that someone else should be nearby if Ciara has to be around his sister. Ciara may think that’s a bit extreme, but Ben will remain truly fearful. In fact, Ben will be scared enough to ask Marlena Evans (Deidre Hall) for advice.

Days of Our Lives spoilers say Ben will explain his dilemma and hope Marlena can help. After Marlena hears Ben’s worries, she may remind him that he was rehabilitated at Bayview. Marlena may point out that Jordan got help as well – at least according to the doctors who released her. However, Ben just won’t think the staff got it right this time. He’ll feel confident Jordan’s a danger to herself and others.

Over with Hope Brady (Kristian Alfonso), she’ll get updates on Rafe Hernandez’s (Galen Gering) new roomie. While Hope wraps her head around Rafe and Jordan living together, Sarah Horton (Linsey Godfrey) will chat with Brady Black (Eric Martsolf). They’ll commiserate over the chaos Kristen DiMera (Stacy Haiduk) caused and how it’s affected them.

Unfortunately, Kristen has even more chaotic plans. She’ll recruit Dr. Wilhelm Rolf (William Utay) for the embryo transfer on Tuesday, but there’ll actually be no need for this scheme. It turns out Kristen is already pregnant, so she’ll face that bombshell later this week.

Other Days of Our Lives spoilers say Kayla Johnson (Mary Beth Evans) will run some crucial tests. Lucas Horton (Bryan Dattilo) just suggested Kate Roberts (Lauren Koslow) as a possible heart donor, which stunned Hope. It would mean the world to Julie’s loved ones if she had a chance to survive.

Julie doesn’t have much time left, so Kayla will get those tests cooking ASAP and hope for a positive outcome. Some huge shockers are coming up in this storyline, so don’t miss the twists and turns ahead. We’ll keep you posted as other Days news emerges. Stay tuned to DOOL and don’t forget to check CDL often for the latest Days of Our Lives spoilers, updates and news.