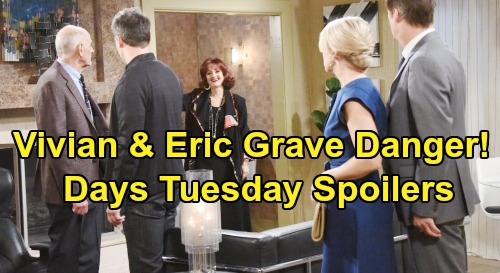 Days of Our Lives (DOOL) spoilers for Tuesday, September 3, tease that Stefan DiMera (Brandon Barash) will reel over some huge news. He looked confused when he heard his mother’s voice on the other end of that phone call, so he’ll probably express some skepticism soon enough. However, Vivian Alamain (Robin Strasser) will assure Stefan that she’s alive and well. She’ll have big plans to reunite with him later this week, September 2-6.

Of course, danger is always just around the corner on DOOL. Days of Our Lives spoilers say one of Kristen DiMera’s (Stacy Haiduk) guards will cause some trouble before long. He’ll end up pulling a gun on Eric, and Vivian will get caught up in the chaos. That’ll put her reunion with Stefan in jeopardy briefly, but everything will work out in the end.

Before Eric lands in his tight spot, he’ll fill Sarah Horton (Linsey Godfrey) in on what he’s learned so far. According to Vivian and Dr. Wilhelm Rolf (William Utay), Nicole Walker (Arianne Zucker) is indeed alive. She just escaped somewhere with Holly Jonas (Harlow and Scarlett Mallory), so it’ll take a bit more work for Eric to find them.

Nevertheless, Eric will be determined to track down the love of his life and the little girl he adores. He could have a family with Nicole and Holly if that determination pays off, so Sarah will once again have mixed feelings. She admitted she doesn’t want Nicole to be dead, but part of her would be relieved if it were true. Even so, Sarah will try to be happy for Eric and push him to complete his mission.

Other Days of Our Lives spoilers say Hope Brady (Kristian Alfonso) will get some support. Doug Williams (Bill Hayes) will be right by Hope’s side as she reads Ted Laurent’s (Gilles Marini) letter. Ted will be able to speak to Hope from beyond the grave, which will leave Hope wondering what might’ve been. She’ll be pretty disillusioned when it comes to love at this point.

There’s no guarantee things would’ve panned out with Ted anyway since he was a liar who helped fake a child’s death. Still, Ted really did love Hope and she might’ve forgiven him eventually. She won’t have the chance now that Ted’s six feet under. Hope will begin to wonder if she’ll even find love ever again; Days fans know nobody ever seems to measure up to her beloved Bo Brady (Peter Reckell).

Doug will console Hope, but he’ll also need some comfort after they get updates on Julie Williams (Susan Seaforth Hayes). Julie was rushed to the ER following a heart attack, so Doug will fear the worst. As for Gabi DiMera (Camila Banus), she’s convinced herself Julie was faking it – although she seems a tad concerned. Gabi’s going to be horrified when she realizes Julie is actually near death in the hospital!

Since Stefan will plan to spring the news of Vivian’s survival on Kate, Gabi will have to worry about that sneak attack, too. She’ll be juggling a lot in the coming weeks as we build to some fall bombshells. We’ll keep you posted as other Days details emerge. Stay tuned to DOOL and don’t forget to check CDL often for the latest Days of Our Lives spoilers, updates and news.