BY hellodrdavis on July 18, 2019 | Comments: one comment
Related : Days of Our Lives, Soap Opera, Spoiler, Television 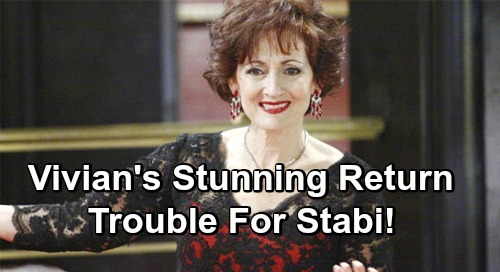 Days of Our Lives (DOOL) spoilers tease that a big return is coming. As DOOL viewers may remember, soap vet Robin Strasser (formerly Dorian Lord, OLTL) will be joining the show this autumn, and DOOL buzz is that she’ll be playing the role of a recast Vivian Alamain. Recall that the role was previously played by Louise Sorel, and that Vivian is presumed dead after being shot by Kate DiMera (Lauren Koslow).

Of course, DOOL viewers know that Kate shot Vivian on purpose, and that Vivian miraculously showed up in an undisclosed location shortly after her “death” at University Hospital. It certainly appears that Vivian was brought back to life by Dr. Wilhelm Rolf’s (William Utay) back-from-the-dead serum, and that she’s been held captive with the other DiMera prisoners.

That all being the case, Days buzz is that there’s a very good chance that Robin Strasser will pop back up as a recast Vivian. And if she does, she’s going to be re-entering her son Stefan DiMera’s (Brandon Barash) life at an interesting time…right when he’s developing and acting on his feelings of love for Gabi Hernandez (Camila Banus).

One has to wonder how Vivian will feel about Gabi. Vivian was always very protective of her son and wanted only the best for him. Will she go the Julie Williams (Susan Seaforth Hayes) route and think that Gabi is just no good for her son? Days of Our Lives spoilers indicate there’s a good chance that there will be some conflict there…especially since Gabi is trying to scam Stefan.

As Days viewers know, Gabi has her sights set on seducing Stefan, getting him to marry her, and then taking him for all he’s worth. But if Vivian gets a whiff of what Gabi is up to or detects even an inkling of insincerity on Gabi’s part, then there could very well be World War III. Of course, Vivian would be the perfect person to blow up Gabi’s big plan.

Days of Our lives Spoilers tease that we could see a situation in which Gabi starts to actually fall in love with Stefan despite her big plan to take him down. Gabi could actually change her mind about destroying Stefan and decide that she wants a real future with him. But what if Vivian finds out somehow that Gabi is up to no good with her son? She might decide to fill him in on the details and totally ruin Stefan’s feelings for Gabi.

Then there’s the Kate wrinkle. Gabi and Kate are close friends for the most part, and they are partners in crime when it comes to wanting to destroy Stefan (at least for now). Vivian and Kate despise each other, and Vivian will probably be strongly predisposed to also despise any friend of Kate’s.

At any rate, something tells us that it’s going to be on the difficult side for Gabi to continue a smooth romance with Stefan once Vivian is back in the picture. We should be in store for some interesting scenes as fierce mama Vivian steps in to protect her son!

Are you looking forward to Vivian’s return and her future conflict with Gabi? Stay tuned to DOOL and don’t forget to check CDL often for the latest Days of Our Lives spoilers, updates, and news.