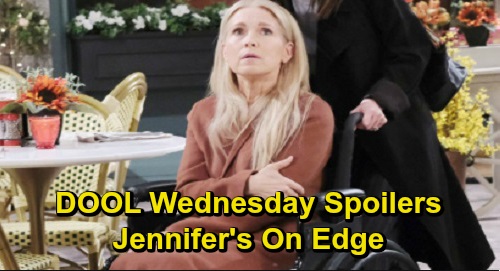 Days of Our Lives (DOOL) spoilers for Wednesday, December 18, tease that “Hope Brady” aka Princess Gina Von Amberg (Kristian Alfonso) will get some infuriating news. She’ll be livid when she realizes John Black (Drake Hogestyn) is kicking her out of the townhouse – and Marlena Evans (Deidre Hall) is the reason why. However, Princess Gina will try to use the situation in her favor. She’ll confirm Marlena’s right about her feelings for John and will push him to admit he’s got the same forbidden feelings.

DOOL fans know John only has eyes for Marlena, so he’ll shut “Hope” down immediately. It won’t be long until Princess Gina’s back at the secret lair, where she’ll vent to Stefano DiMera aka Steve Johnson (Stephen Nichols) about her botched plan. Meanwhile, Rafe Hernandez’s (Galen Gering) search for Dr. Wilhelm Rolf (William Utay) will lead him to Princess Gina and Stefano’s hideout. They’ll have to think fast when Rafe bursts in with a gun.

It turns out “Hope” will have a gun in her hand as well, so Rafe will immediately get suspicious. Days of Our Lives spoilers say “Hope” will lie about getting the same tip Rafe got. She’ll convince Rafe she’s just investigating and will pretend to look around the lair. By this time, Stefano will have escaped out the back, so Rafe will have to mull over the clues “Steffy” left behind.

Other Days of Our Lives spoilers say Marlena will have a chat with Kate Roberts (Lauren Koslow). After they take a moment to catch up, it looks like Marlena will mention Stefano. She received flowers with a card from “S” not too long ago, which led to some Stefano fears. As those fears grow, Marlena may worry about whatever Stefano’s next move might be. Kate will end up feeling pretty guilty since she’s in cahoots with Stefano, but she’ll have to act innocent and give Marlena her support.

Over with Jack Deveraux (Matthew Ashford), he’ll reassure Jennifer Deveraux (Melissa Reeves). She’ll be a bit anxious since Dr. Rolf is still on the loose, but Days viewers know Princess Gina’s actually the one who pushed her. Jennifer may start to suspect there’s more to the story with the help of some eerie hunches and memory flashes. One way or another, the truth has to come out eventually!

It sounds like some hot drama’s brewing in Salem. We’ll give you updates as other Days details emerge. Stay tuned to DOOL and don’t forget to check CDL often for the latest Days of Our Lives spoilers, updates and news.