BY hellodrdavis on December 17, 2019 | Comments: one comment
Related : Days of Our Lives, Soap Opera, Spoiler, Television 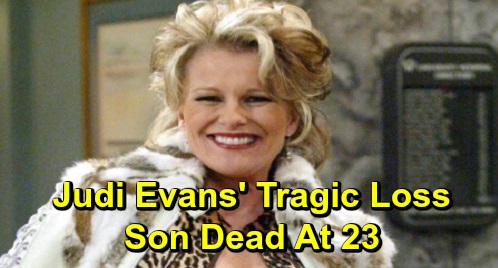 Days of Our Lives (DOOL) spoilers has some sad news to pass on about a beloved DOOL actress. Judi Evans, who portrayed Adrienne Kiriakis and Bonnie Lockhart on the NBC soap, has suffered a terrible loss. Her son, Austin Michael Luciano, has passed away at age 23. A cause of death has not been released.

Austin had recently appeared in the 2019 film “I Am Not For Sale: The Fight To End Human Trafficking.” Back in June of 2018, Judi shared her enthusiasm for working alongside her son on the project. On Twitter, she wrote: “My son Austin Michael Luciano was cast at Brent in the film…can’t wait to see him work his magic!!!!”

Both Judi and Austin appeared in the film with fellow actor Dustin Ardine, who took to his Facebook page to comment on the terrible news. “I am so sorry to hear the tragic news that my friend Austin Michael Luciano has passed away! I acted with Austin Michael Luciano and his mother Judi Evans in the upcoming film ‘I Am Not For Sale: The Fight To End Human Trafficking.’ It was such a pleasure to be on set with both of them everyday.”

Dustin continued: “Had loads of fun with Austin on set and kept in touch with both him and Judi after filming wrapped. I am so saddened to hear this news! My heart and prayers go out to all of Austin’s family and friends. I feel so blessed to have met him and be able to call him my friend, Rest in peace, my friend!”

“I Am Not For Sale: The Fight To End Human Trafficking” is not the first time that Judi and Austin worked together as actors. In fact, Judi’s pregnancy was written into the storyline on Another World, where she portrayed Paulina Cory. Austin’s first acting credit was playing her on-screen son Dante from 1997-1998. Then, in 2005, he appeared on DOOL portraying a child in the hospital, back when Judi was portraying Bonnie Lockhart on the show.

In addition to Judi’s DOOL and Another World credits, she portrayed Beth Raines n Guiding Light and Maeve Stone on As The World Turns. Unfortunately, earlier this year, Austin’s grandfather, Frank M. “Scooter” Luciano passed away, so it’s has been a very difficult time for the family.

We send our sincerest condolences to Judi and her family at this time. Stay tuned to DOOL and don’t forget to check CDL often for the latest Days of Our Lives spoilers, updates, and news.