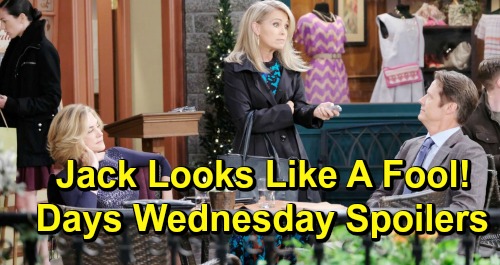 Days of Our Lives (DOOL) spoilers for Wednesday, March 20, tease that Ben Weston (Robert Scott Wilson) will continue to shield Ciara Brady (Victoria Konefal) from danger. He just knocked her to the floor to protect her from a speeding bullet. There’ll be more gunfire soon enough, but Ben won’t let Ciara get injured in the chaos. He’ll make sure his love stays safe from the shots.

Once everything settles down, Ben will realize Chloe Lane (Nadia Bjorlin) was the intended target. He’ll fill his boss in the drama and hope they can avoid other incidents like this. Days of Our Lives spoilers say Chloe will be concerned when she gets updates. She’ll fear El Fideo’s (Andoni Gracia) assassins aren’t going to stop until they kill her and maybe even the kids.

However, Stefan (Tyler Christopher) will remind Chloe of his protection promise. He’ll once again assure Chloe that he’s not going to let anything happen to her family, so DOOL fans can expect them to grow closer. Days of Our Lives spoilers state that Wednesday will mark the end of Tyler Christopher’s run as Stefan, but Brandon Barash will debut as a recast on Friday, March 22.

Elsewhere, Tripp Dalton (Lucas Adams) will battle growing suspicions. He’ll feel like Claire Brady (Olivia Rose Keegan) has deceived him, so he’ll ultimately confront her about it. Days spoilers say Tripp will demand an explanation, which means Claire will have to come up with a fake one. This could be about that fire she started, but we’re betting it’s about Haley Chen’s (Thia Megia) arrest.

Claire will manage to fix this for now, but she’ll face another obstacle later this week. Tripp’s marriage offer to Haley will kick off another crazy chapter of Claire’s twisted story. In the meantime, Jennifer Horton’s (Melissa Reeves) interview with Jack Deveraux (Matthew Ashford) will bring some explosive moments. Jenn will grill Jack hard and hope she can derail his sleazy campaign.

Jack will do his best to handle Jennifer’s intense questioning, but she’ll definitely put him in a tight spot. It looks like a fantastic episode’s on the way. We’ll keep you posted as other Days news comes in. Stick with DOOL and don’t forget to check CDL often for the latest Days of Our Lives spoilers, updates and news.