BY Heather Hughes on May 21, 2019 | Comments: one comment
Related : Days of Our Lives, Soap Opera, Spoiler, Television 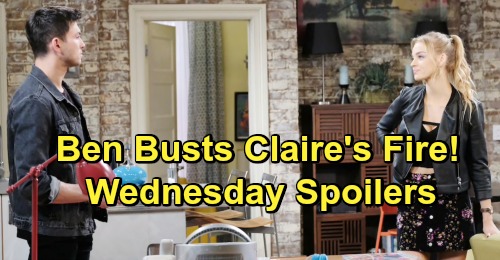 Days of Our Lives (DOOL) spoilers for Wednesday, May 22, tease that Lani Price (Sal Stowers) will have some explaining to do. Ciara Brady (Victoria Konefal) caught Lani in a lie about David Ridgeway, so she just filled Rafe Hernandez (Galen Gering) in. Now it’s time for Lani to come clean about her deception and explain why she did it. She’ll open up to Rafe about her fears and hope he gets it.

Ciara can see all the changes in Ben, but that’s naturally difficult for those who don’t know him as well. Lani lied to keep Ben away from the baby in an attempt to protect him. She couldn’t bear the idea of Ben posing any kind of threat to David, which is understandable in one way and ridiculous in another.

Even if Lani can’t accept that Ben’s a changed man, it’s not like Ben’s going to murder the kid while people are watching him. You’d think a supervised visit would be OK. However, DOOL fans can understand why Lani’s so protective. She lost her own baby, who also happened to be named David, so she certainly doesn’t want anything to happen to this one.

After Lani explains her feelings, it should bring her closer to Rafe. Meanwhile, Days of Our Lives spoilers say JJ Deveraux (Casey Moss) and Haley Chen (Thia Megia) will get closer as well. They won’t be at the location Hope Hernandez (Kristian Alfonso) and Eli Grant (Lamon Archey) just arrived at, so they can enjoy in peace at the Horton cabin – at least for now.

Haley and JJ will keep planning their future, but some surprises are in store for them soon enough. Over with Claire Brady (Olivia Rose Keegan), she’ll find herself in a tight spot. Ben just walked in on a shocking sight at the loft. He’ll wonder if Claire was really planning on torching that pile of clothes, but Claire will try to talk her way out of this.

Nevertheless, Ben will feel like there’s more to the story. Days spoilers say he’ll decide to keep digging and figure out if Claire might be behind the cabin blaze. At the police station, Eve Deveraux (Kassie DePaiva) will get started as Salem’s new police commissioner. She’ll begin plotting Ben’s destruction right away, so he’d better watch out for bogus evidence down the road.