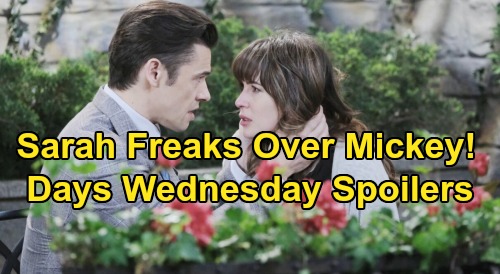 Days of Our Lives (DOOL) spoilers for Wednesday, November 20, tease that some hot drama’s brewing. We should note that if impeachment hearings coverage preempts the show in your area, you can always catch up on NBC.com. There are currently no plans to bump episodes though, so keep that in mind. Now let’s talk about what’s coming up in Salem.

For starters, Sarah Horton (Melissa Reeves) will be frantic over Mackenzie “Mickey” Horton’s disappearance. Sarah just turned around to return some money to a woman who dropped it in the square. When she turned back toward the stroller, Mickey was gone!

What Sarah doesn’t know is that this little money charade was arranged by Clyde Weston (James Read). He warned Ben Weston (Robert Scott Wilson) that it was too late to stop his latest plot – and DOOL fans can certainly see that’s true! Sarah will be a mess as she wraps her head around this missing Mickey mayhem. It won’t be long until she calls the cops as well as Xander Kiriakis (Paul Telfer), so that could help Ciara Brady (Victoria Konefal) out of her tight spot.

Days of Our Lives spoilers say Xander will grill Ciara on Wednesday. He’ll try to figure out what Ciara’s doing in his office, so she may come up with a flimsy excuse. There’s a good chance Xander will remain suspicious, but Sarah’s call about Mickey might save Ciara from more questions. Xander’s priority will definitely be supporting Sarah through this terrible crisis.

Meanwhile, Days spoilers say Clyde’s admission will horrify Ben. Clyde will come clean about ordering Mickey’s snatching, so Ben will immediately flip out. He’ll hear about Clyde’s plan to secure a confession from Xander and return the baby after it’s a done deal.

Clyde won’t end up sticking to that plan, but Ben will still hope he can somehow fix this for Sarah. He’ll call Ciara, explain what’s happening and count on her to handle things on the outside. In the meantime, Sonny Kiriakis (Freddie Smith) will catch up with Chad DiMera (Billy Flynn). Since Chad is a close friend of Sonny’s, he’ll let Sonny know he’s there for him if he wants to talk.

Days of Our Lives spoilers say Sonny will indeed confide in Chad on Wednesday. He’ll open up about Will Horton (Chandler Massey) and his role in Adrienne Kiriakis’ (Judi Evans) death, so Chad will serve as a sympathetic ear. Chad also considers Will a close pal, but he’ll understand why Sonny’s hurt and angry right now. He’ll just want to give Sonny some comfort and perhaps urge him to keep an open mind.

Other Days of Our Lives spoilers say Eve Deveraux (Kassie DePaiva) will make a convincing pitch. She’ll assure Abigail DiMera (Kate Mansi) that she had nothing to do with Jennifer Deveraux’s (Melissa Reeves) fall off that balcony. Eve will insist someone else pushed Jenn and set her up, so Abigail will agree to do some digging. She can’t make any promises, but she’ll at least acknowledge the possibility of another culprit.

Of course, Days viewers know that culprit is Princess Gina Von Amberg (Kristian Alfonso) aka Hope Brady with Princess Gina’s memories. Abigail has some bombshells in her future, so don’t miss what’s in store. We’ll give you updates as other DOOL news comes in. Stay tuned to the NBC soap and don’t forget to check CDL often for the latest Days of Our Lives spoilers, updates and news.