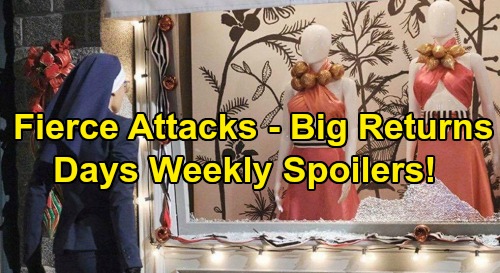 Days of Our Lives (DOOL) spoilers for the week of December 30-January 3 tease that we’ll see some fierce threats and big returns. For starters, Kate Roberts (Lauren Koslow) will get fed up with Stefano DiMera aka Steve Johnson (Stephen Nichols). She’ll be tired of his antics – especially since she’s friends with Marlena Evans (Deidre Hall) and is worried about what’s in store for her.

Kate will threaten to reveal the truth about Stefano and his new look, but she’ll eventually back down. Perhaps Stefano will fire back and suggest that Kate will go down for protecting him all this time. Whatever the case, Stefano’s secret will remain under wraps a bit longer.

Over with Gabi Hernandez (Camila Banus), she’ll be stunned by a discovery at Gabi Chic. It looks like the store in the square will be where the damage goes down. Days of Our Lives spoilers say the window will be smashed with a rock, so Eli Grant (Lamon Archey) will do some investigating. It won’t be long until Eli follows the trail to someone shocking. Will he suspect Lani Price (Sal Stowers) vandalized the property?

Lani will indeed be back in town along with Kristen DiMera (Stacy Haiduk), who’ll be furious over a kiss between Nicole Walker (Arianne Zucker) and Brady Black (Eric Martsolf). Kristen definitely won’t want Brady and Nicole to get any closer, so expect a battle to erupt. Days spoilers say Kristen will make it clear that she wants a reunion with Brady, but that may not come as fast as she would like.

At the New Year’s Eve bash, some bombs will drop thanks to a surprising duo’s appearance. Whether that’s Kristen and Lani or perhaps Kristen and “Steve,” all three of them will make their presence known around this time. Kristen would have no problem keeping Stefano’s secret for him and was recently in touch with Chad DiMera (Billy Flynn) about a deal. She’s bound to get in on the Stefano action eventually.

However, Stefano won’t reveal himself to Salem as Stefano. He’ll claim he’s Steve instead, so DOOL fans can expect Kayla Brady (Mary Beth Evans) and everyone else who knew Steve to blast the man with his face. They’ll have no reason to believe Steve’s been anything other than cruel and self-centered. Only those in Stefano’s inner circle will know Steve’s out of the picture – at least in terms of his mind.

Other Days of Our Lives spoilers say Ciara Brady (Victoria Konefal) will get busted. Xander Kiriakis (Paul Telfer) and Victor Kiriakis (John Aniston) will discover Ciara’s deception, so this situation with Ben Weston’s (Robert Scott Wilson) about to bring some hot drama. Speaking of Ben, the day of his final appeal will arrive. Ciara will give Ben all her support and hope things work out in his favor.

It sounds like another great week’s ahead in Salem. We’ll give you updates as other Days news comes in. Stay tuned to DOOL and don’t forget to check CDL often for the latest Days of Our Lives spoilers, updates and news.