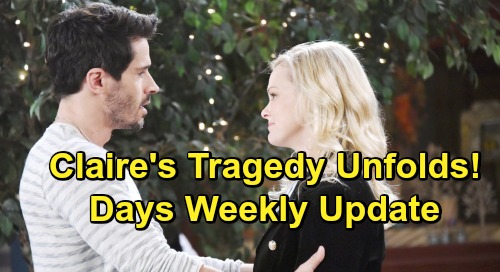 Days of Our Lives (DOOL) spoilers update for the week of July 1-5 tease that some crazy moments are on the way. A desperate search for Claire Brady (Olivia Rose Keegan) will kick off as a hostage situation spirals out of control. Claire will hold Ciara Brady (Victoria Konefal) captive at the cabin and try to explain why she nearly killed her in that first fire.

Of course, it’ll be difficult since Claire can barely explain it herself. She just felt a wave of jealousy and an urgent need to get rid of her problem. Claire will decide Ciara must truly suffer a grim fate this time, but help will arrive before she burns the place down. Hope Brady (Kristian Alfonso), Marlena Evans (Deidre Hall) and Ben Weston (Robert Scott Wilson) will show up in the nick of time.

Claire will nearly set herself on fire next, but Marlena will convince her that help and healing are possible. Days of Our Lives spoilers say Claire will end up sedated at the hospital later. When Ciara takes a look at Claire’s phone, she’ll discover that Eve Deveraux (Kassie DePaiva) knows far more than she’s been letting on!

Speaking of Eve, she’ll also confront Jack Deveraux (Matthew Ashford) this week. When Eve realizes Jack got the charges against JJ Deveraux (Casey Moss) dropped, she’ll want to know why he went behind her back. DOOL spoilers hint that Jack may try to wiggle out of this. He could always argue that he just wanted to do something nice for his son, which probably isn’t a total lie.

However, Eve will suspect there’s more to the story. She may pry the whole truth out of Jack, which is that he made a deal with Will Horton (Chandler Massey) for the diary. Meanwhile, Kayla Johnson (Mary Beth Evans) will tend to injured Tripp Dalton (Lucas Adams) in the hospital. He’ll share a few tender minutes with his stepmom and thank her for her support.

Shawn Brady (Brandon Beemer) won’t exactly be feeling the love when he catches up with Tripp. He’ll feel like Tripp should’ve known Claire was sick and needed help, not a trap. Later, Days of Our Lives spoilers say the Brady-Horton barbecue will begin. Eric Brady (Greg Vaughan) and Rex Brady (Kyle Lowder) will end up having a cookoff at this fun summer event.

In the DiMera tunnels, Kate Roberts (Lauren Koslow) and Ted Laurent (Gilles Marini) will feel a familiar spark. They were romantically involved once upon a time, so being in close quarters together will stir up old feelings. Days fans can expect some steaminess as Kate and Ted seek a solution to their predicament.

It sounds like some excellent episodes are coming up. We’ll give you updates as other Days news emerges. Stay tuned to DOOL and don’t forget to check CDL often for the latest Days of Our Lives spoilers, updates and news.