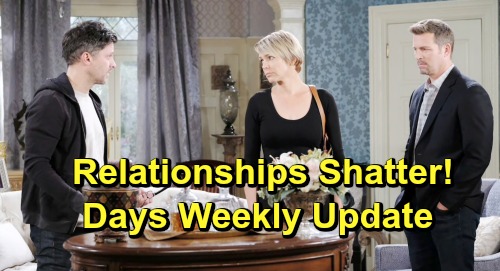 Days of Our Lives (DOOL) spoilers for the week of May 6-10 tease that some stunning drama’s ahead in Salem. First, let’s talk about the storyline that everyone will be talking about. After Rafe Hernandez (Galen Gering) disobeys Hope Hernandez (Kristian Alfonso) and makes a bad call, there’ll be a terrible accident. The van believed to be carrying Holly Jonas (Harlow and Scarlett Mallory) will fly off a cliff.

As if that weren’t bad enough, that van will also explode. Days of Our Lives spoilers state that Nicole Walker’s (Arianne Zucker) heart will shatter when she realizes her daughter is gone – except she isn’t. Xander Cook (Paul Telfer) and Ted Laurent (Gilles Marini) will have Holly, but they’ll keep that new to themselves for now.

In the meantime, the aftermath of Holly’s presumed death will be brutal. Nicole lash out at Eric and turn to Brady Black (Eric Martsolf) instead. After Xander walks in on Nicole and Brady’s close moment, he’ll start plotting other ways to stir the pot. DOOL fans know Xander can’t stand it if he’s not shaking things up!

Other Days spoilers say Hope will blast Rafe for ignoring her instructions. She’ll blame him for costing Nicole her daughter, so it’ll lead to a huge fight. Hope and Rafe’s marriage will finally be destroyed. Rafe will even fling his wedding ring off the cliff where Holly was “killed,” so that’ll seal the deal.

At the hospital, Days of Our Lives spoilers reveal that Dr. Kayla Johnson (Mary Beth Evans) will deliver terrible news. She’ll fill Will Horton (Chandler Massey) and Sonny Kiriakis (Freddie Smith) in on something they didn’t want to hear. Although Will’s tumor is benign, it’s still growing and will become more dangerous as time goes on. Risky surgery may be required if it becomes Will’s only option.

Over with Dr. Marlena Evans (Deidre Hall), she’ll do her best to guide Dr. Sarah Horton (Linsey Godfrey) through heartbreak. Things should get even more complicated for Sarah after Nicole turns against Eric. Next, Tripp Dalton (Lucas Adams) will urge Claire Brady (Olivia Rose Keegan) to seek help. He spotted half of his wedding photo, which had been damaged by Claire at the loft.

Tripp can sense that Claire’s coming unhinged, so he’ll encourage her to stop the madness. He’ll think Claire could definitely use some counseling, so he may suggest Marlena as the best option. Claire has opened up to her grandmother in the past, but she can’t do that now. She won’t want to tell Marlena that she was behind Ciara Brady’s (Victoria Konefal) attempted murder!

Instead, Claire will give Eve Donovan (Kassie DePaiva) another recording that proves Tripp’s marriage to Haley Chen (Thia Megia) is a fake. That’ll lead to Eve’s ultimatum and Haley’s shocking move, so stay tuned. Finally, Ben Weston (Robert Scott Wilson) will hope to be there for David. He’ll take steps to spend more time with the kid if possible and hopefully form a bond.

Days spoilers say another thrilling week’s ahead on the NBC soap. We’ll give you updates as other details emerge. Stick with DOOL and don’t forget to check CDL often for the latest Days of Our Lives spoilers, updates and news.