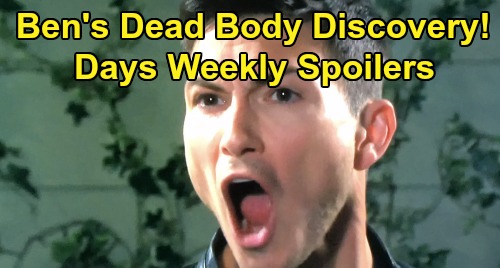 Days of Our Lives (DOOL) spoilers for the week of November 4-8 tease that heartbreak is ahead in Salem. First, Lani Price’s (Sal Stowers) wedding to Eli Grant (Lamon Archey) will end in disaster. Gabi DiMera (Camila Banus) has forced Lani into an impossible situation, so Eli will wind up devastated. Lani will dump Eli at the altar to meet Gabi’s demands and keep Julie Williams (Susan Seaforth Hayes) alive.

Afterward, Eli will be left confused about how it all went so wrong. He thought Lani was just as happy as him in this relationship. Julie will also be taken aback when she learns Lani broke things off. As for Abe Carver (James Reynolds), he’ll grill his daughter and try to get to the bottom of this. Abe knows Lani pretty well by now, so he should sense that she’s holding back.

Gabi will be satisfied with the chaos she’s created, but she’ll pay for it when Lani decks her! It won’t be the first time Gabi’s taken a punch over her scheming and it probably won’t be the last. Meanwhile, Marlena Evans (Deidre Hall) will have a warning for Sarah Horton (Linsey Godfrey). She won’t like the idea of Sarah falling for Xander Cook (Paul Telfer), so she’ll advise against dating him.

Other Days of Our Lives spoilers say Nicole Walker (Arianne Zucker) will wrestle with her secret. She knows Sarah’s pregnant, but she’ll struggle over whether she should tell Eric Brady (Greg Vaughan). When Nicole confronts the “baby mama,” Sarah will insist this has to stay under wraps. She’ll push Nicole to forget what she’s learned and just enjoy her future with Eric.

Next, Brady Black (Eric Martsolf) will face off with Xander while Kristen faces a pregnancy crisis. Will Kristen choose to leave Brady in the dark? There’s a chance this crisis will spark a miscarriage, so that might be a good reason to keep Brady out of the loop. Kristen’s finally making progress with her love, and she won’t want to blow it.

Later, Days spoilers say Kristen will deliver a shocking news to Eric. It seems Kristen may drop the baby bomb before Nicole has the chance, so that’ll inevitably come back to bite Nic. Elsewhere, Ben Weston (Robert Scott Wilson) will have a horrific nightmare about Jordan Ridgeway (Chrishell Hartley). He’ll dream he’s killing his sister, but his horror will get worse when he discovers a dead body.

It sounds like Ben will wake up next to Jordan’s corpse after this dream and perhaps briefly question reality. However, there’s a good chance another character came along and killed Jordan after knocking Ben out. Too bad that’s not what the cops will believe!

Princess Gina (Kristian Alfonso) will shove Jenn off the bistro balcony to silence her, which will leave Jack and JJ Deveraux (Casey Moss) gaping in the town square below. Days of Our Lives spoilers say Jennifer will be in a coma after emergency surgery. She’ll remain in that coma for at least a full year, but it’ll take place off screen. Jack will flip an hourglass that signifies the time jump we’ve all been waiting for.

It looks like some great drama’s ahead, so stay tuned. We’ll give you updates as other Days details emerge. Stick with DOOL and don’t forget to check CDL often for the latest Days of Our Lives spoilers, updates and news.