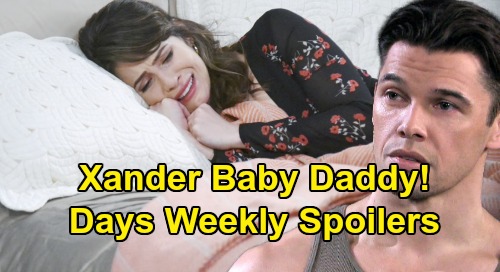 Days of Our Lives (DOOL) spoilers for the week of September 16-20 tease that some big moments are coming up. For starters, Eric Brady (Greg Vaughan) and Nicole Walker (Arianne Zucker) will have a long-awaited reunion in the bedroom. They’ll make love and seal the deal on the future they’re planning together.

Meanwhile, Sarah Horton (Linsey Godfrey) will remain a mess over her pregnancy dilemma. This is a nightmare for her, but Xander Cook (Paul Telfer) will think he’s the answer to her problems. Days of Our Lives spoilers say Xander’s devotion will move Sarah and leave her with a big decision to make.

It looks like Sarah will agree to let Xander pose as the “baby daddy.” DOOL fans can expect a serious altercation between Eric and Xander in the week ahead. There’s a good chance Eric will attack Xander after he finds out Xander fathered her child. Of course, that won’t be true, but it’ll make for an interesting storyline!

Other Days of Our Lives spoilers say Jordan Ridgeway (Chrishell Hartley) will score her release. She’ll be back from Bayview and in Rafe Hernandez’s (Galen Gering) care. Rafe will be legally responsible for Jordan, so he’ll certainly hope she got the help she needs.

Ben Weston (Robert Scott Wilson) will fear the worst when he finds out Jordan is free. Part of Ben will want to be happy for his sister, especially since he recovered and got his life back on track. However, Ben just won’t be so sure Jordan’s turned things around. He’ll be terrified that something could happen to Ciara Brady (Victoria Konefal), so he’ll be keeping an eye on Jordan.

Over with Anna DiMera (Leann Hunley), she’ll beg Kristen DiMera (Stacy Haiduk) to help free Tony DiMera (Thaao Penghlis). It seems Kristen will indeed help Tony in hopes of proving herself to Brady Black (Eric Martsolf). Kristen will want to show Brady she’s capable of good deeds, but he probably won’t buy this one. Besides, all the good deeds in the world wouldn’t make up for what Kristen’s done.

Even so, Brady will struggle with complex feelings for Kristen. It appears he’ll open up about those during a heart-to-heart with John Black (Drake Hogestyn). Back with Kristen, she’ll grill Xander about Sarah’s bun in the oven. It sounds like Kristen won’t believe this cover story they’ve come up with, so we’ll see if Xander admits it’s a lie.

Elsewhere, Days spoilers say Jennifer Horton (Melissa Reeves) will be held hostage by Dr. Henry Shah (Piter Marek). Jack Deveraux (Matthew Ashford) will switch into hero mode after Jennifer sneaks a text to him. She’ll be desperate for her love to save the day!

At the hospital, Lucas Roberts (Bryan Dattilo) will show up and get some horrible news about Kate Roberts (Lauren Koslow). He’ll fear Kate isn’t going to make it, so that’ll bring some devastation. Finally, Will Horton (Chandler Massey) will do some eavesdropping. He’ll overhear Vivian Alamain (Robin Strasser) talking to Stefan DiMera (Brandon Barash), so she may tip Will off to her murder attempt.

Days spoilers say some hot drama’s ahead, so stay tuned. We’ll give you updates as other DOOL details emerge. Stick with the NBC soap and don’t forget to check CDL often for the latest Days of Our Lives spoilers, updates and news.