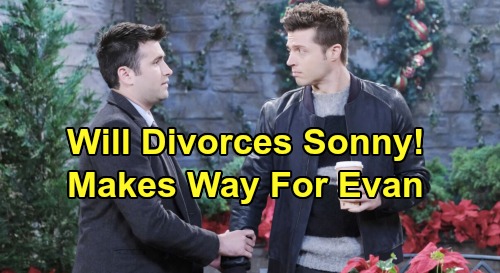 Days of Our Lives (DOOL) spoilers tease that Will Horton (Chandler Massey) will soon make a big sacrifice. As DOOL viewers know, Will is currently in prison for causing the death of Adrienne Kiriakis (Judi Evans) – something that has put a great deal of strain on his marriage to Sonny Kiriakis (Freddie Smith). It seems that Sonny has been absolutely miserable since the accident that took his mother’s life, as he ended up losing both his mother and his husband at once.

Recently, Sonny has befriended the new nanny hired by Rafe Hernandez (Galen Gering). The nanny, Evan Frears (Brock Kelly), has been a ray of light for Sonny, who really needs some companionship. Things had been understandably strained between Sonny and Will for a while, and finally Will told Sonny to stop visiting him at the prison. Sonny complied, and now his only source of companionship is Evan.

Sonny and Evan have really hit it off, and although Sonny wasn’t really looking for someone new, he has certainly found that in Evan. Recently, Evan kissed Sonny, and while Sonny was a little taken aback, he wasn’t upset by the development. Clearly, TPTB at Days of Our Lives are leaning into to Sonny/Evan coupling, and soon things will get complicated for Sonny.

Specifically, Kate DiMera (Lauren Koslow) will find out about the kiss between Sonny and Evan. Exactly how she learns about the kiss remains to be seen, but she’ll hear the news and DOOL spoilers say that she won’t be happy about it at all. As Will’s grandmother, she’ll naturally feel protective of him, and she’ll accuse Sonny of cheating on will. That same day, Kate will visit Will, and she might pass the news onto him.

If so, then Will’s going to have a pretty bad day, because that’s also the day he’ll come face-to-face with Justin Kiriakis (Wally Kurth), and it looks like it will be the first time that the two will be in the same airspace since Will’s trial for killing Adrienne. At any rate, it’s pretty likely that Kate’s going to pass the news onto Will about Sonny’s kiss with Evan. That should horrify Will, but it looks like it may give him an idea about what he must do.

According to Days of Our Lives spoilers, Will is going to make a difficult sacrifice for Sonny shortly before the Christmas holiday. It will be a sacrifice designed with Sonny’s happiness in mind, which doesn’t sound good. Could Will ultimately decide to divorce Sonny and set him free, so that he can have happiness going forward? Perhaps Will is going to realize that even if he gets out of prison, he and Sonny could never recapture what they had.

After all, the fact that Will was responsible for Sonny’s mother’s death will always stand between them. He may come to accept this and decide to give Sonny the ultimate gift…freedom. We’ll see what happens here, but it’s certainly looking like Will might have a particularly bad holiday in prison, as he deals with the demise of his marriage and the knowledge that Sonny is into someone new.

Will you be sad to see Sonny and Will’s marriage come to an end? Stay tuned to DOOL and don’t forget to check CDL often for the latest Days of Our Lives spoilers, updates, and news.