Days of Our Lives Spoilers: Xander Devastated, Loses Baby Mickey To Eric – Lashes Out At Nicole For Confessing 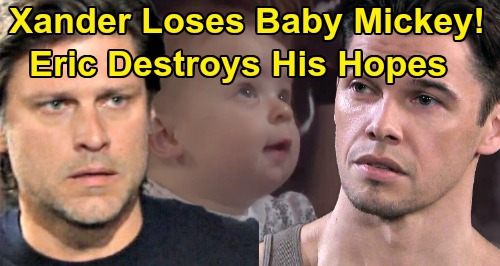 Days of Our Lives (DOOL) spoilers tease that Xander Kiriakis (Paul Telfer) is in for a a big shock. As DOOL viewers know, Xander agreed early on to help Sarah Horton (Linsey Godfrey) out by pretending to be the father to her baby. Sarah wanted to keep Eric Brady (Greg Vaughan) from knowing that he’s really Mickey’s father, so Xander stepped in and pretended to be the dad.

It all seemed like a good idea at the time, but it seems that Xander has really fallen in love with Mickey. Despite knowing that he’s not her bio dad, he’s cared for her and taken the role of father in her life. And he won’t be happy at all when the truth comes out about Eric being Mickey’s father.

As DOOL viewers know, Eric has just proposed to his true love, Nicole Walker (Arianne Zucker). But Nicole has been living with the guilt of the secret about Mickey’s true paternity for a year, and DOOL spoilers say that she’ll break down and confess to Eric that he’s the father of Sarah’s baby, and that she’s known about it for a very long time.

And that’s going to set off a big chain of events. Eric will be horrified that Nicole has kept such an explosive secret from him, but he’ll have other pressing matters on his mind in the short term. As DOOL viewers know, Mickey has been kidnapped, and so Eric will learn not only that Mickey is his, but that his own daughter is missing and in potentially deadly danger.

The good news here is that it looks like Mickey will be returned to Sarah and Xander unharmed. They’ll be overjoyed, but it seems that their joy will be short-lived because Eric will burst in and reveal that he knows that Mickey is his daughter. And while he will have some joyous moments with his newfound daughter, there will be someone who will be absolutely devastated – Xander.

And we all know what Xander does when he gets upset – he lashes out. DOOL viewers can expect Xander to let Nicole have it in the days to come. He’ll be peeved that Nicole up and spilled the secret after all this time, so there will be a major confrontation there. Nicole will really have blown up his life, especially since DOOL spoilers indicate that Eric will soon try to completely oust Xander from Mickey’s life.

Specifically, DOOL spoilers say that Eric will agree to sharing custody of Mickey with Sarah on one condition – and it appears that the condition will be that she cuts Xander out of Mickey’s life. If that’s the case, then Xander is going to be terribly hurt, and probably even angrier at Nicole than he ordinarily would have been.

We’ll see what happens with this situation going forward, but we suspect that Xander will probably want some sort of revenge on Nicole. Do you think he’ll go after Nicole for making him lose his close relationship with Mickey? Stay tuned to DOOL and don’t forget to check CDL often for the latest Days of Our Lives spoilers, updates, and news.