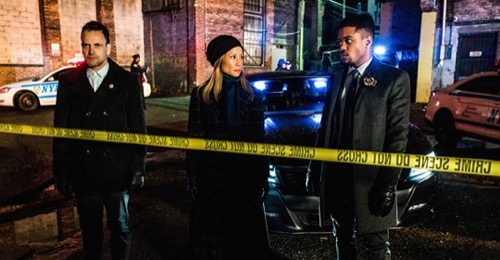 News outlets are hot on Odin’s sentencing, 148 years. Joan appears on The Morning Show. It has been 3 years since the murder of Sherlock Holmes, she tells the show’s host. Unfortunately, Odin wasn’t charged in the murder she tells them. She has since wrote a book about it.

Joan arrives at the precinct to see her3-year-old son, Arthur, who has stopped by to see her. Joan and Marcus catch up on their latest case. Marcus is the captain now. Joan goes home to the brownstone where she lives. She has completely cleaned it up with bright paint and decor. She tells her assistants to go home for the night. She has a visitor, a friend of Jamie Moriarty. He has arrived to tell Joan she is dead. He has brought a package to be given to Sherlock and since he isn’t here any longer it goes to Joan.

Joan heads out to visit Sherlock’s grave. She takes a swing at the headstone with a hammer. Next thing, she wakes in bed and comes out to see Sherlock. He wants to help her now that she has come to his grave. She was only supposed to come there in an emergency. They talk about the package from Jamie. Sherlock knows she isn’t dead. They go back and forth. Joan is angry that she hasn’t seen Sherlock in 2 years. He was supposed to keep in contact with her, reaching out each month. Joan is called to a murder scene. She arrives and is given an update by Marcus. A man has been found dead on the rocks by the water.

Back at the brownstone, Joan and Sherlock meet on the roof. He smiles after learning that she kept the bees for Arthur. They head inside to discuss where Sherlock has been for the last couple of years. He shares how he changed his name, took on new alias’ and jobs, made new enemies and that is why he stayed away. She admits she was angry and her book was a bit of revenge against him. He hated sharing things about himself. They dive back into Jamie and why she would lie about her death. Joan admits to Sherlock that she told Marcus and the Captain that he is alive. They head to meet Marcus who punches Sherlock in the stomach. Apparently, he is still upset about what Sherlock did.

Joan, Marcus and Sherlock go through some files while Marcus scolds Sherlock. He updates him on how the Captain’s wife has died. They find a wire transfer and head to meet a person of interest. It looks like their victim was in deep for a card game. The POI swears he didn’t have anything to do with the vic’s death. Joan gets a message from an associate of Jamie’s.

Joan arrives at a function to see Jamie’s employee. They go back and forth. She knows Sherlock is alive and has known for months. Why someone would want Joan to think Jamie is dead is weird. Jamie’s employee has to run but it was fun. Joan calls Sherlock and tells him what she has learned. Meanwhile, Sherlock has found the location of the card game where their victim died. His phone goes black.

Sherlock finds Odin’s associate McNally from the NSA in front of him. They exchange digs. He knew Sherlock was alive. The work he has been doing in foreign countries is impressive and he has lured Sherlock here to ask him to work for the US. The catch – Sherlock would have to be a ghost for the rest of his life.

At home, Sherlock is waiting for Joan who is with Arthur. He introduces himself to Arthur. He tells Joan about McNally’s offer. He needs to leave soon either way. Before he goes he wants to get dinner with her and Arthur and he also needs to see the Captain.

Sherlock meets with the captain. They sit and talk. Sherlock admits he relapsed while he was gone. He cannot come back because of this. The captain tells him that Joan recently had a lump removed. Sherlock rushes home. Joan admits she has cancer and starts chemo soon. He hugs her as she cries. He is staying. He cannot believe she was going to let him leave without telling him.

Sherlock stands in front of a casket. McNally arrives. He pays his condolences and offers Sherlock a job again. Sherlock laughs at him and leaves. He heads home. Joan is inside. They talk about how he just attended Jamie’s fake funeral. They head to the precinct. They talk outside. Joan is nervous. Sherlock consoles her. Marcus will say yes. They plan to work together again!