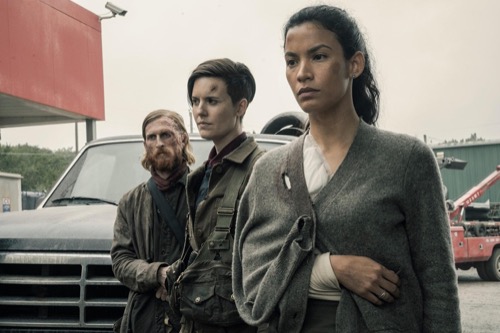 On AMC tonight Fear The Walking Dead (FTWD) airs with an all-new Sunday, July 7, 2019, episode and we have your Fear The Walking Dead Recap below! On tonight’s FTWD season 5 episode 6 called, “The Little Prince,” as per the AMC synopsis, “Facing impossible odds, Luciana and the group work together to tackle an impossible task while Morgan helps prevent disaster; an old friend presents Sarah, Charlie and Strand with a solution.”

Annie gets cleaned up in the bathroom. The kids all watch cartoons laughing. Morgan radios to Annie. He tells her they need to move soon. Annie doesn’t understand how until he tells her to open the gate. Morgan and the others ride in with helicopter parts. They made it! Morgan gives them all a pep talk about doing the impossible and being a team, having each other’s back. They plan to fix the plane and fly back together.

Morgan radios Grace telling her about how they met some people and plan to get home. She listens but doesn’t respond. Morgan eyes a broom. Maybe a new weapon? Alicia walks in and laughs at him as he tries to pull the mop head off.

Sarah works on the hanger reduction box. Meanwhile, June looks at Annie’s ankle and tells her to rest up a bit. She knows she wants to run. She used to run too. Outside, Al turns on the plane. The propeller flies off. Al is upset. Morgan tells them they’ll fix this. Grace radios. There is going to be another meltdown unless she helps her with a list of supplies.

John siphons gas while talking to Dwight who is still looking for his wife. Dwight explains that he and Sherry were split up before they were split up. He admires John for being so unaffected by this world. John explains that things are better for him now.

Grace talks to Alicia and tells her they need to finish the plan fast. Victor radios to Luciana. He is going to get her back somehow. They lose signal. Victor is upset. Sarah tells him they will find a way. Charlie thinks she has already looked at an ad from Jim’s brewery.

Morgan arrives to see Grace. They need to move cars and suit up and go in. Meanwhile, Al continues to work on the plane. She blames herself for letting the helicopter take off. June tells her she couldn’t have changed anything. June offers to talk with her about anything. Al doesn’t respond.

Annie tells Max and Dylan they need to go back to the way things were. Luciana and Alicia try to tell her they can help. But she isn’t hearing it.

Dwight tells John that Sherry gave everything up to save him. He owes her his life. In a diner, John finds something. It’s a note. Dwight has been looking on the wrong road this whole time.

Annie tells Alicia that she doesn’t want to go with them because at another camp some of the people weren’t careful. They attracted the dead. They were from the power plant. When the walls of their camp looked like it was going to give way the adults sent them away. They hid in the woods in a designated spot, crying and eating old granola bars in the dark. The adults never came for them. She went back to the camp on her own and found her parents and the others sick in a cabin. They wouldn’t let her in. She promised to stay in the woods and look over the other kids and her brothers until they were better. She can’t leave now. Alicia wants to help. She cant surround herself around the dead. Maybe she is doing it to avoid the living?

In a car outside the diner, John finds a letter to Dwight from Sherry. She urges him to move on without her. Meanwhile, Morgan finds his staff in the back of Grace’s truck. He holds it. He tells her about hope and trying. Grace jumps into the truck. He needs to let her go in alone. She needs to fix her mistakes. There isn’t another suit. Morgan lets her go.

Victor radios to Alicia and Luciana. They found propellers and they are headed to them in a hot air balloon. The girls and kids look up to see a giant beer bottle balloon floating their way. Alicia runs to get Annie and the boys. It looks like they left. Alicia lets Morgan know.

Dwight comes out of a house to see John who tells him he didn’t find anything in the car, deciding not to tell him about the letter.

Victor and Charlie are starting to lose fuel. They are going to have to make a fast landing and in a contaminated zone. Morgan warns them to be careful and not to get walker blood on them. Meanwhile, Alicia is going in after arriving to find Annie and the others. Unable to help himself, Morgan runs into the contaminated zone too.