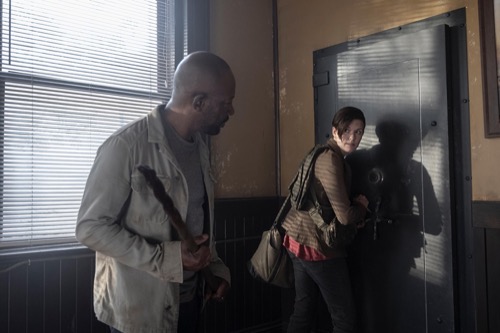 On AMC tonight Fear The Walking Dead (FTWD) airs with an all-new Sunday, August 25, 2019, episode and we have your Fear The Walking Dead Recap below! On tonight’s FTWD season 5 episode 11 called, “You’re Still Here,” as per the AMC synopsis, “As Alicia struggles to find her new role in the convoy, she’s drawn to mysterious artwork.

A simple scouting trip is derailed when she and Strand are thrust into a conflict between desperate survivors. Meanwhile, Morgan and Al hit a roadblock.”

Alicia is very interested in the painted trees, she is looking at one when a bunch of walkers come up and she is turning over a new leaf by not killing any. Thankfully, Strand arrives just in time to kill them and save her. The two look at the tree, she asks him if he ever gets the feeling that the universe is trying to tell him something.

Strand tells Alicia that they are low on fuel and will have to meet up with the rest of the convoy, and he doesn’t think it is good for her to be out there. All of a sudden, they hear someone’s voice over the radio. The man recognizes Alicia’s voice, Strand guesses that he saw the tapes; he tells them his name is Wes.

Stand and Alicia meet up with Wes, they give him a ride.

Alicia is in the truck with Strand and Wes, she tells them that she wants to meet the people who painted the trees; know what they were thinking and what they are about. They arrive at the police station and Wes says home sweet home. Wes says he is going to go in and tell his brother that he is ok. Alicia says they will unload his bike. All of a sudden shots go off, a man runs out of the house and steals Strand’s truck, Wes comes running out of the house shooting at the man, but he gets away.

Walkers are coming from everywhere, Wes opens up the door to another truck and pulls out guns, throws one over to Strand. Alicia grabs a weapon but doesn’t help. Strand shoots one of the walkers who is equipped with tear gas; everyone is having trouble breathing and Strand yells at them to get inside.

Inside Strand is suffering, he got the tear gas in his eyes. Alicia helps him by pouring water on him. Alicia asks Wes for the truth, he says he was after the man because he stole something from him and he doesn’t have a brother, or at least he hasn’t for a long time. Outside there are too many walkers for them just to up and leave. Alicia admits to Strand that he is right, maybe she shouldn’t be out there. She tells him that she doesn’t want to kill the dead, but she wants to help out and doesn’t know if that is possible.

Althea and Victor are back on the road, they look ahead and see a roadblock; Logan and his people with a huge 18 wheeler. Logan wants to know where the oil fields are. Morgan and Althea won’t tell him.

Morgan and Althea go back to their track and try to think about another way around the roadblock. Morgan says he doesn’t have time for this, grabs his stick and goes back over to speak to Logan. Morgan asks him why he needs gas. Morgan says that he can help him. Logan says that he is not going to do the “take what you need, leave what you don’t” crap, he wants to know where the oil fields are. Morgan tells Logan that he will find another way. Logan says helping other people will not help Morgan help his wife and son. Morgan turns around fast and puts his stick to Logan’s throat. Althea tells him to lower it and stop. Morgan and Althea leave.

Alicia packs up ammunition. She grabs a weapon from Strand, says that she is going out there to kill the walkers, so they can get out of there. Wes comes around and says he is going to help.

Wes goes outside and starts killing walkers. Meanwhile, one walker makes his way through a glass door and is coming at Alicia and Strand. Alicia picks up a weapon, but Strand comes through last minute, even though he has problems seeing because of the tear gas.

Morgan and Althea are back in the truck, they talk about the documentary they made. Althea says that what they lost doesn’t define them, but maybe what they do will.

Wes, Strand, and Alicia find the truck and the man that stole from Wes. Wes approaches him, the man throws the bag at him and tries to strangle Wes, but Wes has a knife and stabs him. Wes asks the man where is his manuscript. Wes finds it, the man tells him that it was really good stuff, then he dies. Alicia can’t believe that Wes killed the man over a book. Wes walks away, Alicia picks up the book and tells him that he forgot his book, Wes turns around and says the man died for the book, he can keep it.

Alicia looks at Wes’ book. He says the same thing at the end of the book that was written on the trees; Wes painted those trees.

Alicia decides she is going to paint a tree, Strand tells her it is beautiful. A walker comes up, Strand says he has got it, she says no, she will do it, and she does. Alicia then paints on the tree, “no one is gone until they’re gone.”

We left the group and finds a tree that he painted, and gets emotional.

Morgan tells Althea that she is wrong and she is right. He is not running away from anything, he is not a ghost and not what he just lost. He holds on to it because it is connected to it. He says that sometimes he is afraid that he may lose some of the good. Althea says that she can make sure he doesn’t forget, he can tell her about his wife and son, he says ok.

Meanwhile, someone is breaking into the safe where Althea put her safes. It is Logan and his people, they broke in. Logan is looking for journals, but he finds the tapes and is hoping somebody slipped up on one of them and mentioned where the oil fields are.