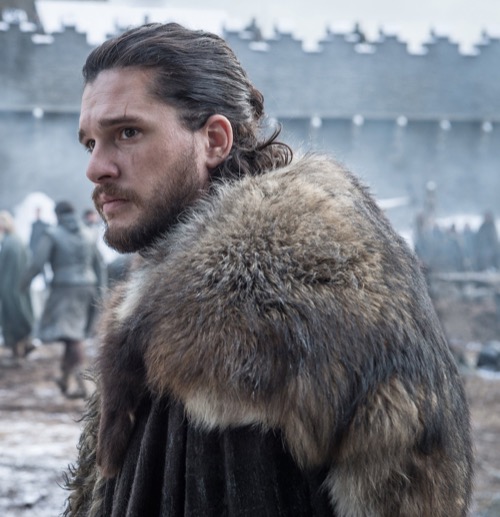 Tonight on HBO, Game of Thrones is back with an all-new Sunday, April 28, season 8 episode 3 and we’ve got your Game of Thrones recap down below! On this evening’s episode as per the HBO synopsis, “The depiction of two powerful families – kings and queens, knights and renegades, liars and honest men – playing a deadly game for control of the Seven Kingdoms of Westeros, and to sit atop the Iron Throne.”

Samwell is given a dragon glass weapon. He walks the grounds appearing scared. Sansa watches from the rooftop. Winterfell lines at the ready as the dragons fly overhead. They wait as the dead draws closer. Daenerys and Jon watch from a distance. The Red Woman rides up on horseback. She chants to give all of their swords the power of fire. The night lights up as Jorah smiles with appreciation. Davos yells for the gates to open. He comes face to face with the Red Woman who tells him not to bother, she will be dead before dawn.

The war begins as the first batch of Winterfell fighters rush fast towards the enemy. Within moments their fiery swords and their lives go black. The others wait. Horses come back. Silence before hundreds of dead rush at them. Jon and Daenerys both get on dragons and ride, shooting fire across the sky, killing all they can. Meanwhile, the dead’s new dragon is blowing cold air at those of Winterfell.

Arya tells Sansa to get into the crypt. Samwell nearly meets his fate but is saved. Sansa arrives in the crypt to see Tyrion and the others. He takes one look at her and takes a drink off of his flask.

Daenerys and Jon battle the cold winds as they fly, nearly falling off. On the ground, men rush back into the gate trying to get away. Grey Worm readies his men. They push forward through the dead fearlessly. Arya works from the rooftop, saving the Hound from one of the dead on his tail. Grey worm commands to light the trench. Davos tries to flag down Daenerys. She cannot see. The dead continue to rush in by the hundreds.

The Red Woman comes to the front of the trenches and chants. She manages to ignite all in fire pushing back the dead and showing Daenerys where to land.

In the crypt, Tyrion is angry he is not out fighting. Sansa explains that they are all there because there is nothing they can do.

Theon apologizes to Bran for all he has done. But Bran is glad, it brought him home. Bran explains that he is going to go now. Ravens fly across the sky. The Night King comes into the forefront.

At the wall, dead pile on top of one another, killing themselves so that the others can walk on top of them away from the flames through to the trenches. Davos yells for more men to man the walls. Jon sees the Knight King fly past on his dragon. The dead begin to climb the walls. Jamie and Gendry work to fight them back. Jamie and Brienne work back to back.

Arya comes out swinging. The Hound stands frozen against the wall. A giant breaches the wall. Lady Mormont steps in to fight him. He sends her flying. The Hound sees Arya in trouble and finally moves. Lady Mormont gets up and goes back to fight the giant. He picks her up. She stabs him in the eye with dragon glass. They both fall to the ground.

Jon and Daenerys ride through the clouds. Meanwhile, Arya tries to evade several of the dead in the hall. Just when she is about to get out of there safe dozens of the dead chase her. She makes her way though the halls running.

Soldiers cry on the other side of the door of the crypt where Sansa sits with women, children, Tyrion and the others.

At the end of the hall Beric and the Hound come to Arya’s aid. They fight. Beric is attacked but manages to get out with them. They find safety on a roof top where the Red Woman is. What she told Arya was all true – she would fight those with brown eyes, green eyes and blue eyes.

Jon runs at the Knight King who with a flick of his wrist raises the dead all around him before walking off. Meanwhile, in the crypt the dead make their way though the walls. Women and children scream.

Daenerys comes to Jon’s rescue with her dragon lighting the dead that surround him on fire. She lands her dragon. The dead keep coming and attack. She is thrown from Dracaryswho flies off into the night.

Jorah saves Daenerys who is surrounded by the dead. Back at the castle, Tyrion and Sansa hide with their knives at the ready. Tyrion finally comes out to fight. The Knight King makes his way to Bran.Theon, who has been protecting Bran from the dead all night, chats at him but is killed. Jorah meets his death trying to protect Daenerys in the yard.

The Knight King approaches Bran. Arya flies out of nowhere and manages to stab him. He bursts into ice. His dragon, who is right in the face of Jon, bursts into ice. Daenerys holds Jorah, crying as he takes his last breath.

Light breaks across the sky. They have won the war. Davos catches as the Red Woman walks out of the castle and across the yard. She takes off her necklace, turning into an old woman before she falls to the ground an dies.