General Hospital Spoilers: 3 Secrets That Need to Be Exposed ASAP – Which Big Reveals Do GH Fans Want the Most? 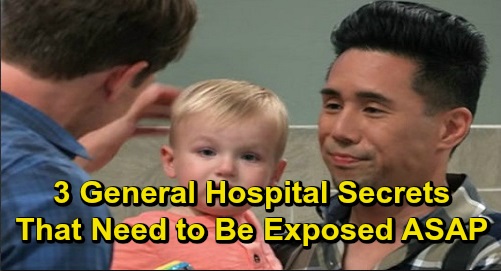 General Hospital (GH) spoilers tease that the show’s juggling several secrets, but it’s time to move things along on some of them. Of course, it’s great that GH is keeping a few bombshells under wraps and setting up some big reveals. A couple of the other soaps struggle in that department, so General Hospital should be applauded for having climaxes to build toward.

However, it feels like GH has been opening up too many new story loops without closing old ones. There’s the secret of Julian Jerome (William deVry) tampering with Brad Cooper’s (Parry Shen) car. We’ve also got Nikolas Cassadine’s (Marcus Coloma) survival being kept from most of Port Charles.

In other words, there are plenty of new secrets to keep the drama going. What about the old secrets that have been buried for far too long? It’s clear that some shockers desperately need to come out – and fast! General Hospital needs to get a move on before viewers lose interest completely. Here are three secrets that need to be revealed ASAP.

Baby swap storylines should always take a while to play out, but GH is going overboard. As Michael Corinthos (Chad Duell) mentioned recently, “Wiley Cooper-Jones” (Erik and Theo Olson) isn’t really a baby anymore. Michael’s already missed so much of his young son’s life. Willow Tait (Katelyn MacMullen) is constantly dwelling on a kid that isn’t even hers. It’s high time for GH to end the misery and just give Michael his baby back already!

2) The identity of Nina’s bio daughter

This is another long-held secret that GH really needs to get the ball rolling on. If Sasha Gilmore (Sofia Mattson) isn’t Nina’s biological child, then who is? What about the other half of that heart pendant? Willow seems to be the bio daughter based on her random feud with Nina, but most fans figured that out long ago. Let’s hope GH writers have a twist in mind or at least go ahead and drop that predictable bomb soon.

Peter August’s (Wes Ramsey) secret was never truly a good one. Maxie Jones (Kirsten Storms) and everybody else knew Peter was involved in the memory-mapping mess, so his level of involvement never felt like that big of a deal. Peter’s redemption was destroyed unnecessarily, but it’s indeed been destroyed. He’s a murderous monster who keeps wiggling out of trouble, so Peter’s ruin is needed in the near future.

Are you ready to see these three secrets come out? Which big reveal do you want to see happen most of all? General Hospital spoilers say there’s hope for some revelations in the new year, so stay tuned. We’ll give you updates as other GH news comes in. Stick with the ABC soap and don’t forget to check CDL often for the latest General Hospital spoilers, updates and news.