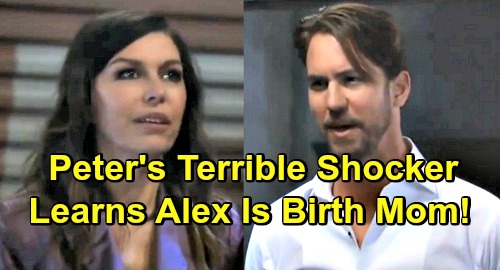 General Hospital (GH) spoilers tease that Peter August (Wes Ramsey) is in for a shock, which involves the woman he believes is his mother. Anna Devane (Finola Hughes) realizes she may have some of her twin sister’s memories. She doesn’t know which ones yet, but she will down the road.

Naturally, there’ll be some crucial memories that belong to Alex Devane Marick (Finola Hughes) – like the memory of sleeping with Cesar Faison (Anders Hove) and giving birth to Peter. Anna will be taken aback when she learns the truth. She faced an emotional journey that brought Peter into her life. They don’t know each other all that well, but Anna already has a lot of love in her heart for him.

Peter hesitated to build a relationship with Anna, but he was finally getting there. They were on the right track to forming a solid mother-son bond. However, some stunning news will change everything. General Hospital spoilers say Anna will ultimately realize Peter is actually belongs to Alex after she meets with Andre Maddox (Anthony Mongomery) on this week’s new GH epsiodes, March 11-15.

Once Peter gets updates, how will this shocker affect him? Peter will inevitably be curious about his real mom, so he’ll want to meet Alex and potentially get to know her. Anna will certainly be worried about that. She knows how Alex operates, so she may worry about her sister pulling some stunt or hurting Peter in some way. There’s even a chance Alex will reject Peter entirely.

Peter rebelled against Faison, but he had to do some ruthless things to make it happen. Still, Peter doesn’t think he’s anything like his father. He could embrace the fact that he had one kind parent in Anna before, but the Alex revelation will change the game. Peter may feel like a bad seed and become somewhat bitter. That’s especially true if Alex manipulates Peter in some way.

GH already redeemed Peter as best as they could. They may not want to throw that away, but Peter could still internalize the evil he comes from. He may feel like he’s not good enough for Maxie and should keep his distance.

Regardless, Sasha will make it clear that her loyalty lies with Nina. It looks like she’ll share a nice moment with Peter, so they could be setting up a new romantic path for him. Maybe they could eventually bond over feeling close to the women who aren’t really their moms.

Then again, Peter could be paired up with someone like Ava Jerome (Maura West), who’ll need a new love interest sooner or later. Even Carly Corinthos (Laura Wright) could be an option if she loses the baby and things head downhill in her marriage. Real-life loves Wright and Ramsey would probably be on board with their characters getting paired up.

Whatever the case, Maxie could face competition and heartbreak. Peter may not be the same guy once his world’s rocked by an Alex bomb. We’ll keep you posted as other GH details emerge. Stay tuned to the ABC soap and don’t forget to check CDL often for the latest General Hospital spoilers, updates and news.