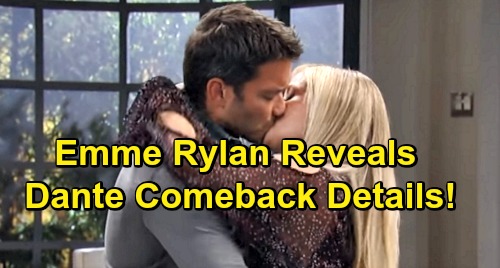 General Hospital (GH) spoilers reveal that Dante Falconeri (Dominic Zamprogna) is headed back to Port Charles soon. Of course, there’s no one more anxious to see him than Lulu Falconeri (Emme Rylan)! She’s missed her husband terribly and will miss him even more as she continues to cope with the Ryan Chamberlain (Jon Lindstrom) revelation.

Lulu can’t believe she allowed Ryan to fool her like that. He hypnotized Lulu and brainwashed her into believing Franco Baldwin (Roger Howarth) was behind her attack. It’s been a lot to take in, so it’s a shame Dante isn’t around to support her. Dante wasn’t around to help Lulu through her recovery from the attack either. He’s missed a lot, so Lulu will need him more than ever by the time he returns.

It isn’t Dante’s fault that he’s been held hostage in Turkey, but there’ll still be some important issues for Lulu and Dante to work through. However, the fact that they’re both alive after their horrifying ordeals will mean everything. It sounds like some fantastic “Lante” moments are in the works.

In an interview with Soap Opera Digest, Rylan talked about what it was like shooting Lulu and Dante’s reunion scenes. “We had fun,” Rylan said. “We already shot them and we had a really good time. Actually, I think we had too good of a time!” She quickly clarified what she meant by that.

Rylan suggested that since Dante’s return isn’t permanent, having “Lante’s” chemistry on display again is a bit of a tease. “I was like, ‘Oof! It’s a hard time to be a Dante/Lulu fan right now,” Ryan admitted. “If this was me watching, I’d be sad – not sad because anything sad happens – but just…that reminder of ‘Oh, this is what we’re missing out on.”

It’s interesting that Rylan hastily added that nothing sad happens. Was that a slight slipup? We’d imagine there’ll have to be some sadness at some point. Zamprogna signed a 10-episode contract, which isn’t long at all. How will GH keep the story going without Dante around permanently? Since Dante and Lulu will have to be torn apart again somehow, that alone is sad!

Nevertheless, the initial reunion itself is supposed to be wonderful. Rylan is definitely excited for General Hospital viewers to see it. “The moment when I see him…Oh, it was so good,” Rylan said. She talked about the big “You’re back” scene and hinted that “Lante” lovers wouldn’t be disappointed.