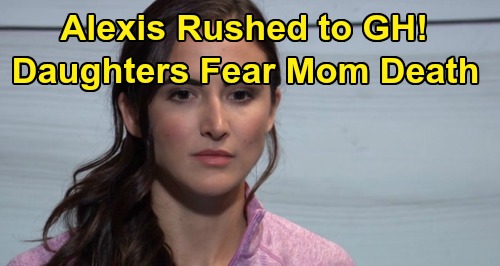 General Hospital (GH) spoilers tease that Alexis Davis (Nancy Lee Grahn) will fall prey to Kendra Lennon’s (Michelle Argyris) evil plan. Kendra wants to avenge Kiefer Bauer’s (Christian Alexander) death, so it won’t be long until Alexis pays the price. Alexis was enthusiastic about the first round of the Kendra’s supplement. She suggested she’d need more, but she doesn’t know this next batch is lethal!

Since Alexis felt great while taking the supplement before, she’ll have no reason to suspect anything’s wrong with it now. Unfortunately, this could be a deadly regime if Alexis keeps it up. General Hospital spoilers say Alexis will begin feeling ill during the week of October 28-November 1. On Halloween, it seems Alexis will have to bail on any festivities she planned to attend.

Alexis will assume she’s got the flu, so she’ll likely settle in at home – and perhaps let Kristina Corinthos-Davis (Lexi Ainsworth) or Molly Lansing-Davis (Haley Pullos) take care of her. Neil Byrne (Joe Flanigan) might pop in as well just to see how Alexis is holding up. Alexis will feel certain that this it just a bug that’ll pass. She’s a tough cookie, so she won’t let a little flu get her down.

However, this is far from the flu and ignoring the problem could make matters worse. By the time Alexis realizes how serious this is, she should be in deep trouble. Kendra will be poisoning Alexis right under her nose. General Hospital spoilers say Alexis’ condition will deteriorate during the week of November 4-8. Her health will take a horrifying turn, so Alexis may collapse and get rushed to GH.

This might be a good time to bring Julian Jerome (William deVry) into the story. He’ll indeed land in the middle of the drama eventually, so maybe Julian could be the one to make sure Alexis gets to the hospital. Julian could also develop some suspicions that could help Alexis. Will he realize Kendra’s up to something? Somebody has to step up and take down this attempted murderer!

Until then, Alexis’ loved ones will have to rally around her. Let’s hope Jason Morgan (Steve Burton) can get Sam McCall (Kelly Monaco) off the hook soon. She’ll want to be there with Kristina and Molly during the worst of Alexis’ life-threatening crisis. We’ll give you updates as other GH news comes in. Stay tuned to the ABC soap and don’t forget to check CDL often for the latest General Hospital spoilers, updates and news.