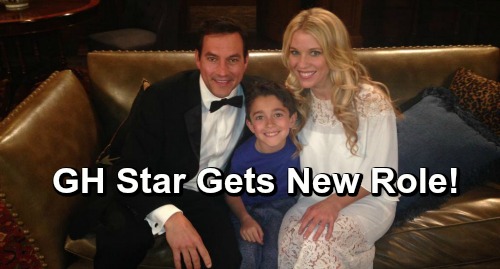 General Hospital (GH) spoilers tease that one ABC soap alum has an exciting new role. GH fans will recall that Alicia Leigh Willis played Courtney Matthews until the character’s death in 2006. For those of you who forget, Courtney was Spencer Cassadine’s (Nicolas Bechtel) mom and had other important Port Charles connection. Since then, Willis has gone on to star in shows like The L Word and American Heiress as well as some great films.

Now Willis has a new project in the works, and it sounds quite intriguing. She plays Special Agent Reynolds in a horror mini-series called Evil Touch. The story follows some young American students who find themselves in a remote village. This village is in Armenia and turns out to be a pretty dangerous place. An evil spirit has been stuck there for centuries, so you can imagine all terror that could bring.

Since Willis’ character is with the FBI, it sounds like there’ll be a tough case to crack. On Instagram, Willis posted some fun pics to get fans excited about what’s in store. Evil Touch is currently in postproduction, but it’s set to be released later this year.

Many General Hospital watchers like to follow the careers of their favorite stars once they’ve moved on. If you fall into that category and you like horror shows, Evil Touch will probably be right up your alley. Willis certainly seems thrilled to be doing something a little different and taking on a new challenge.

It turns out Willis isn’t the only daytime drama alum taking part in this mini-series. Erik Fellows once played Troy Winston on Days of Our Lives, but he’s now playing Special Agent Franco in Evil Touch. Daniel Covin is another soap alum who scored a role in this project. He once portrayed Hunter Morrison on All My Children, but he’s Cameron in this hot gig.

As for Willis, it looks like she’s going to knock this role out of the park! GH viewers will always miss her as Courtney, but it’s nice to see she’s finding work and staying in the acting game. General Hospital spoilers say there’s much more drama ahead in Port Charles, so stay tuned. We’ll give you updates as other news comes in. Stick with the ABC soap and don’t forget to check CDL often for the latest General Hospital spoilers, updates and news.

Is there something wrong with this shot??? #theeviltouch #actress #setlife #FBI